As the Polar/Arctic Sea Ice recedes, the Arctic is increasingly becoming an arena for great power competition: China is Advancing its Polar Silk Road,” while Russia continues to pursue legal, military and commercial avenues to exploit the geostrategic advantages Arctic waters could offer it in the future. Where for decades the Arctic was described as “high north, low tension,” these realities are forcing a shift in strategic thinking within NATO, particularly among member states adjacent to the Arctic and party to multilateral governance structures in the North, like the Arctic Council, whose parameters don’t address military security questions. Other, non-Arctic actors, including Singapore, Japan and the European Union, alongside key individual members states have also developed their own strategies on the Arctic. In this seminar with former U.S Ambassadors Paula Dobriansky (FDP Senior Fellow), David Balton and former Chair of the Arctic Research Commission and Belfer Center Fellow, Fran Ulmer, we will examine key countries’ economic and national security interests in region; the role of the rule of law in preventing conflict alongside critical questions of governance to balance environmental, economic and security concerns in this expert seminar.

This event is co-sponsored by the Arctic Initiative. 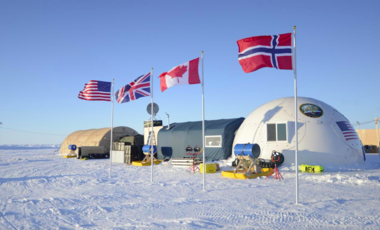 US Navy / Tyler Thompson
Ice Camp Sargo, located in the Arctic Circle, serves as the main stage for Ice Exercise 2016.
About

As the North Sea Ice recedes, the Arctic is increasingly becoming a target for great power competition: China is Advancing its “polar Silk Road,” While Russia continues to pursue legal, military and commercial avenues to exploit the geostrategic advantages arctic waters could offer it in the future. Where for decades the arctic was described as “high north, low tension” these realities are forcing a shift in strategic thinking within NATO, particularly among member states adjacent to Arctic waters and party to multilateral governance structures in the North, like the Arctic Council, whose parameters don’t address security questions per se. Other, non-(direct-Arctic actors, including Singapore, Japan and the European Union, alongside key individual members states have also developed their own strategies on the Arctic. In a March 11 seminar with U.S Ambassadors Paula Dobriansky, David Balton and Chair of the Arctic Research Commission, Fran Ulmer, we will examine key countries’ economic and national security interests in region; the role of the rule of law in the Law of the Seas in preventing conflict alongside critical questions of governance to balance environmental, economic and security concerns in this expert seminar. This event is co-sponsored with the Belfer Center's Arctic Initiative.

Ambassador Paula J. Dobriansky is a foreign policy expert and former diplomat specializing in national security affairs. She is a Senior Fellow at the Future of Diplomacy Project at Harvard Kennedy School’s Belfer Center for Science and International Affairs and Vice Chair of the National Executive Committee, U.S. Water Partnership. From 2010 to 2012, Ambassador Dobriansky was Senior Vice President and Global Head of Government and Regulatory Affairs at Thomson Reuters. In this position, she was responsible for designing and implementing a corporate approach for engagement in Washington, D.C. and other key capitals around the globe. During this time, she was also appointed as the Distinguished National Security Chair at the U.S. Naval Academy. From 2001 to 2009, Ambassador Dobriansky served as Under Secretary of State for Global Affairs. Among her primary accomplishments, she established and led the U.S.-India, U.S.-China, and U.S.-Brazil Global Issues Fora — which advanced crucial work and international cooperation on environment, energy, health, development, and humanitarian issues. Additionally, she was head of delegation and lead negotiator on U.S. climate change policy.

Ambassador David A. Balton is a Fellow at Stanford Center for Ocean Solutions and a Senior Fellow at the Woodrow Wilson Center’s Polar Institute. He previously served as the Deputy Assistant Secretary for Oceans and Fisheries in the Department of State’s Bureau of Oceans, Environment and Science, attaining the rank of Ambassador in 2006. He was responsible for coordinating the development of U.S. foreign policy concerning oceans and fisheries, and overseeing U.S. participation in international organizations dealing with these issues. His portfolio included managing U.S. foreign policy issues relating to the Arctic and Antarctica. Ambassador Balton functioned as the lead U.S. negotiator on a wide range of agreements in the field of oceans and fisheries and has chaired numerous international meetings. During the U.S. Chairmanship of the Arctic Council (2015-2017), he served as Chair of the Senior Arctic Officials. His prior Arctic Council experience included co-chairing the Arctic Council Task Forces that produced the 2011 Agreement on Cooperation on Aeronautical and Maritime Search and Rescue in the Arctic and the 2013 Agreement on Cooperation on Marine Oil Pollution Preparedness and Response in the Arctic. Ambassador Balton previously served for 6 years as Director of the Office of Marine Conservation in the Department of State and for 12 years in the Department’s Office of the Legal Adviser.

Fran Ulmer is chair of the U.S. Arctic Research Commission, where she has served since being appointed by President Obama in March 2011. In June 2010, President Obama appointed her to the National Commission on the BP Deepwater Horizon Oil Spill and Offshore Drilling. From 2007 to 2011, Ms. Ulmer was chancellor of Alaska's largest public university, the University of Alaska Anchorage (UAA). Before that, she was a Distinguished Visiting Professor of Public Policy and Director of the Institute of Social and Economic Research at UAA. She is a member of the Global Board of the Nature Conservancy and on the Board of the National Parks Conservation Association. Ms. Ulmer served as an elected official for 18 years as the mayor of Juneau, a state representative, and as Lieutenant Governor of Alaska. She previously worked as legal counsel to the Alaska Legislature, legislative assistant to Governor Jay Hammond, and Director of Policy Development for the state. In addition, she was the first Chair of the Alaska Coastal Policy Council and served for more than 10 years on the North Pacific Anadromous Fish Commission. She has served on numerous local, state, and federal advisory committees and boards.

Cathryn Clüver Ashbrook is the founding Executive Director of the Future of Diplomacy Project, which examines the challenges to negotiation and statecraft in the 21st century. She looks back on a ten-year career in international journalism and communications, during which she covered global affairs, most notably EU politics and business and the aftermath of September 11th, working as a producer and writer for CNN-International based in Atlanta and London. She served on the management team of the European Policy Centre in Brussels, where she was the Deputy Editor of its public policy journal, Challenge Europe and the think tank’s Communications Director, before joining Roland Berger Strategy Consultants as Senior Journalist and consultant in 2005. There, she worked on public policy issues (demographic change, urban competitiveness, green energy) and advised both the consultancy’s Chinese and French offices on branding and communication strategies. In 2009 she served in the second Bloomberg mayoral administration, where she implemented an online program for New York City's 1.8 million limited-English-proficiency migrants to access essential public services.