Are "Advanced" Nuclear Reactors Actually Better? A Critical Examination of the Safety, Security, and Environmental Risks of Non-Light-Water Technologies

A Project on Managing the Atom (MTA) seminar with Edwin Lyman, Director of Nuclear Power Safety at the Union of Concerned Scientists. 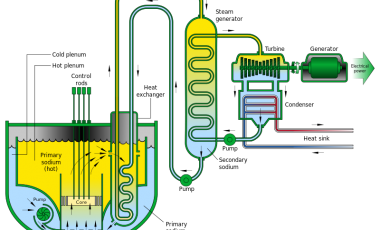 Sfr.gif/Wikimedia Commons
A diagram of a sodium-cooled fast reactor.
About

If nuclear power is to play an expanded role in mitigating climate change, newly built reactors should be demonstrably safer and more secure than current-generation reactors. Today, many US companies and the Department of Energy are making significant investments in the development of nuclear reactors that use coolants other than water, such as liquid sodium, helium gas, and molten salt. These are fundamentally different from today’s water-cooled reactors. But is different actually better? A recent study by the Union of Concerned Scientists (UCS) finds the answer is “no” for most designs in terms of safety and security, sustainability, and the risks of nuclear proliferation and nuclear terrorism. The report recommends that policymakers and private investors fully vet the risks and benefits of these technologies before committing the vast resources needed to safely commercialize them.

Edwin Lyman is the Director of Nuclear Power Safety at the Union of Concerned Scientists in Washington, DC. He earned a doctorate in physics from Cornell University in 1992. From 1992 to 1995, he was a postdoctoral research associate at Princeton University's Center for Energy and Environmental Studies (now the Science and Global Security Program). From 1995 to 2003, he worked for the Nuclear Control Institute. His research focuses on nuclear power safety and security. He is a co-author (with David Lochbaum and Susan Q. Stranahan) of the book Fukushima: The Story of a Nuclear Disaster (The New Press, 2014). In 2018 he received the Leo Szilard Lectureship Award from the American Physical Society.