Book Talk: Inside the Battle of Algiers: Memoir of a Woman Freedom Fighter (Rescheduled)

Note: This talk has been rescheduled for Monday, October 2 at 4:00pm from its original date on Tuesday, September 12.

A seminar with Zohra Drif, Algerian freedom fighter and Senator on Algeria's Council of the Nation, 2001-2016, on her recent book Inside the Battle of Algiers: Memoir of a Woman Freedom Fighter from Just World Books.

*The event will be conducted in English and French, with translation as necessary. 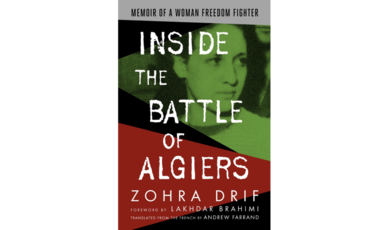 Just World Books
Inside the Battle of Algiers: Memoir of a Woman Freedom Fighter, by Zohra Drif, translated by Andrew Farrand

Note: This talk has been rescheduled for Monday, October 2 at 4:00pm from its original date on Tuesday, September 12.

A seminar with Zohra Drif, Algerian freedom fighter and Senator on Algeria's Council of the Nation, 2001-2016, on her recent book Inside the Battle of Algiers: Memoir of a Woman Freedom Fighter from Just World Books.

*The event will be conducted in English and French, with translation as necessary.

With a foreword by Lakhdar Brahimi, this gripping insider’s account chronicles how and why the author, as a young French-educated woman in 1950s Algiers, joined the armed wing of Algeria’s national liberation movement to combat her country’s French occupiers. When the movement’s leaders, driven underground by the French security services, turned to Drif and her female colleagues to conduct attacks in retaliation for French aggression against the local population, they leapt at the chance, engraving their names among Algeria’s most iconic historical figures. (Their actions were later portrayed in Gillo Pontecorvo’s famed film “The Battle of Algiers”.)

When first published in French in 2013, this intimate memoir met with great acclaim—and no small amount of controversy. It is essential reading for anyone seeking to understand not only the anti-colonial struggles of the twentieth century and their relevance today, but also the specific challenges that women often confronted (and overcame) in those movements.

More, including advance praise for the book, available from Just World Books.

Zohra Drif is a hero of Algeria’s war of national liberation. Born in 1934 in Tiaret, in western Algeria, she studied law at the University of Algiers before joining the National Liberation Front. As a core member of the movement’s armed wing in Algiers, she conducted or supported several high-profile operations that advanced the revolutionaries’ struggle to draw international attention to France’s abuses against the local population and the Algerians’ need for freedom. Ultimately captured by the French and condemned to twenty years of forced labor for “terrorism”, she spent five years in prison in Algeria and France, during which she continued her legal studies and her activism.

In 1962, upon her country’s independence, she was freed from prison, and was soon elected to Algeria’s first National Constituent Assembly. She co-founded an organization to support youth orphaned in the liberation struggle, and went on to practice as a criminal lawyer in Algiers for several decades. A senator in Algeria’s Council of the Nation from 2001 to 2016, she served as a senate vice president from 2003 onward. In 1962 she married Rabah Bitat, one of the founding architects of Algeria’s liberation movement, with whom she had three children. Today she lives in Algiers and has five grandchildren.

Lakhdar Brahimi is a distinguished international diplomat who since 1993 has served as the UN’s Special Representative in Haiti, South Africa, Afghanistan, Iraq, and Syria. In the 1950s he was one of the leaders of Algeria’s national liberation movement, the FLN. After independence he served Algeria in senior diplomatic roles, then became Foreign Minister. He has made many contributions as a global thought leader including on issues of war, peace, and the environment. He is a member of the small, London-based group “The Elders”.

Andrew G. Farrand, a native of Baltimore, Maryland, is fluent in French and North African Arabic. Since moving to Algiers, Algeria in 2013, he has worked as a writer, photographer, and freelance translator alongside his day job managing youth exchange and training programs. He blogs at ibnibnbattuta.com.