*THIS EVENT HAS BEEN CANCELLED.

A seminar with Nejmeddine Hamrouni, Advisor to the Prime Minister of Tunisia, in charge of Strategic Affairs. 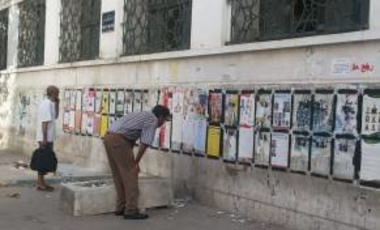 Giada Frana
A Tunisian man inspects campaign posters outside of a polling station.

*THIS EVENT HAS BEEN CANCELLED.

A seminar with Nejmeddine Hamrouni, Advisor to the Prime Minister of Tunisia, in charge of Strategic Affairs.

Dr. Hamrouni plans to address the following issues:
- The new political landscape in Tunisia after the parliamentary election of October 26
- Dynamics and major issues that are continuing shaping the political landscape
- Main scenarios for the democratic transition in progress

Dr Nejmeddine Hamrouni is a Tunisian psychologist and politician. He has been serving as an Advisor to the Prime Minister, in charge of Strategic Affairs, in the three Governments since the 2011 elections (Under Prime Ministers Jebali, Laarayed and Jomaa). Dr Hamrouni is a member of the national council of the Tunisian Ennahdha party.

Dr Hamrouni played a significant role in the resolution of the political crisis in Tunisia following two political assassinations in February 2013 and July 2013. He contributed to the National Dialogue process launched in Autumn 2013 to resolve the political impasse and has been a strong advocate for such consensual solutions.

Born in Tunis in 1965, Dr Hamrouni went in exile to France in 1991, where he pursued his studies. He received his Ph.D. in psychology from Paris VIII University. Dr Hamrouni's research focuses on the application of the Multiplicity Paradigm to the clinical psychotherapy of groups of families and institutions.

He is married and has four children.