Moderated by Reem Al-Saud, postdoctoral research fellow for the Policy Research Engagement with the Ministry of Labor of Saudi Arabia project.

*Lunch will be provided. 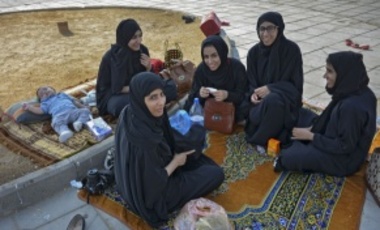 Getty Images
Girls eat with their family along the Corniche in Jeddah, Saudi Arabia.

Moderated by Reem Al-Saud, postdoctoral research fellow for the Policy Research Engagement with the Ministry of Labor of Saudi Arabia project.

Are the mind-sets of young Arab different from that of their parents, and if yes, then in which ways is the generational divide most salient? In particular, have they become more or less emancipated in the face of increased exposure to global culture? Are young Arabs more supportive of the values of democracy and separation of church (mosque) and state? Do they embrace the values of patriarchy, or do they resist obedience and authority? Are they more tolerant to pluralism than their parents? In sum, what are the trends on social, economic, and political values of Arab youth which together, constitute, if not a changing “identity” relative to the past, then at least an emerging mindset, or world view, driven mainly by the younger generation and thus a precursor to change that would in time seep into the larger society. The talk will explore what the sixth wave of the World Value Survey, which covered 10 Arab countries, says about these questions.

Ishac Diwan currently holds the “Chaire D’excellence Monde Arabe” at Paris Sciences et Lettres, and he is affiliated as a research visitor with Dauphine University and the Paris School of Economics. His current research interests focus on political economy issues in the Middle East, and include a focus on the study of crony capitalism, and of opinion surveys. Ishac is directing the Economic and Political Transformation program of the Economic Research Forum. He recently released a volume he edited, entitled Understanding the Political Economy of the Arab Uprisings, in July 2014. He is a fellow at Harvard University Middle East Initiative.

Ishac got his PhD in Economics from the University of California at Berkeley in 1984. He taught international finance at the New York University’s Business School between 1984-87, before joining the World Bank in 1987, where he worked in the Research Complex (1987-92), the Middle East department (92-96), the World Bank Institute (96-2002). Ishac lived in Addis Abeba (2002-07) and Accra (2007-11), as the Bank’s Country Director for Ethiopia and Sudan, and then for Ghana, Liberia, Sierra Leone, Burkina Faso, and Guinea. He taught at the Kennedy School between 2011 and 2013.