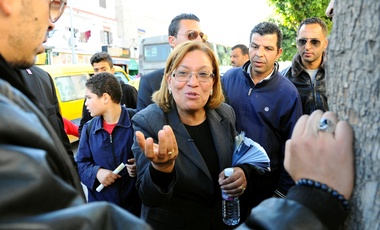 AP Photo/Hassene Dridi
Kalthoum Kennou, a judge and former head of the country's judges' association, the first woman to take part in the presidential elections, campaigns in a street of Tunis, Wednesday, Nov.19, 2014.

Women’s empowerment has been at the forefront of the global development agenda. Drawing on data from four original survey experiments conducted in Tunisia, Libya, Egypt, and Jordan between 2012 and 2014, Ellen Lust and Lindsay Benstead assess which traits or social, economic, or political roles make women more electable and find that the professional backgrounds candidates bring to the table, whether as civil society activists or business leaders, play an important role. I discuss these results within the context of women’s under-representation in politics and highlight implications for governments and activists working to levels the playing field in the Middle East and beyond.

Lindsay J. Benstead is Associate Professor of Political Science in the Mark O. Hatfield School of Government at Portland State University, Contributing Scholar in the Women’s Rights in the Middle East Program at Rice University, and Affiliated Scholar in the Program on Governance and Local Development (GLD) at the University of Gothenburg and Yale University. She served as Kuwait Visiting Professor at SciencesPo in Paris (fall 2016). Benstead has conducted surveys in Morocco, Algeria, Tunisia, Libya, and Jordan and contributes to the Transitional Governance Project. Her research on women and politics, clientelism and governance, and public opinion in the Arab world has appeared in Perspectives on Politics, International Journal of Public Opinion Research, Governance, and Foreign Affairs. A member of the steering committee of the Project on Middle East Political Science, she serves on the editorial broads of the Journal of North African Studies and PS: Political Science & Politics. She holds a Ph.D. in Public Policy and Political Science from the University of Michigan--Ann Arbor and served as doctoral fellow in the Council on Middle East Studies, Yale University and as post-doctoral fellow in the Department of Near Eastern Studies, Princeton University. For more on her research, see https://pdx.academia.edu/LindsayBenstead