Reassessing Global Governance: What are the Geopolitical and Geoeconomic Implications of COVID-19?

Join us for the KF-Harvard Belfer Center Virtual Dialogue examining the longer term geopolitical and geoeconomic implications of COVID-19 for global governance.

The Korea Project acknowledges the generous support of the Korea Foundation for this event. 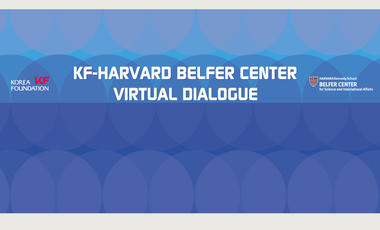 9:10 AM  Panel 1:  Geopolitical Implications
Context:  In a world changed by COVID-19, leaders will have to adapt to a host of rapidly evolving challenges and opportunities. On the international level, the growing trend among leaders has been competition rather than cooperation.  What are the specific ways in which the rise of geopolitics will impact global governance during the new normal of co-existing with COVID-19?  What is the role of national actors in this new normal?

10:00 AM  Panel 2:  Geoeconomic Implications
Context:  To flatten the curve and tame the global spread of COVID-19, national authorities like the U.S. government have implemented what economist Jason Furman has called “a medically induced coma” of their economies. How will leaders balance public health goals with the need to restart their economies? What are the main geoeconomic implications of national actors operating in a global environment lacking robust cooperation and economic policy coordination?

Aditi is the Executive Director of the Belfer Center at the Harvard Kennedy School. Prior to coming to the Belfer Center, Kumar was a Principal at Oliver Wyman, a management consultancy, in the financial services and public policy practices. She worked primarily with U.S. commercial and investment banks as well as U.S. regulators and policymakers on designing and implementing financial and economic policy. Kumar previously served as a project manager at the World Economic Forum, responsible for leading policy discussions among financial sector executives and policymakers on managing financial risk and designing effective global financial regulation. Kumar is a graduate of the Harvard Kennedy School and the Harvard Business School, where she studied international affairs, and specifically the nexus of national security and financial and economic policy. She previously worked at the International Affairs office of the U.S. Department of the Treasury, focused on assessing the public debt sustainability of Eastern European nations. She graduated from the Huntsman Program for International Studies and Business at the University of Pennsylvania with a Bachelor of Science in Economics and a Bachelor of Arts in International Studies.

Professor Nye is University Distinguished Service Professor, Emeritus and former Dean of the Harvard’s Kennedy School of Government. He received his bachelor’s degree summa cum laude from Princeton University, won a Rhodes Scholarship to Oxford University, and earned a Ph.D. in political science from Harvard. He has served as Assistant Secretary of Defense for International Security Affairs, Chair of the National Intelligence Council, and Deputy Under Secretary of State for Security Assistance, Science and Technology. His most recent books include Soft Power, The Powers to Lead, The Future of Power, Is the American Century Over?, and Do Morals Matter? Presidents and Foreign Policy from FDR to Trump. He is a fellow of the American Academy of Arts and Sciences, the British Academy, and the American Academy of Diplomacy. In a recent survey of international relations scholars, he was ranked as the most influential scholar on American foreign policy, and in 2011, Foreign Policy named him one of the top 100 Global Thinkers.

Dr. Park is Director of the Korea Project at Harvard Kennedy School. He is also a Faculty Member of the Committee on Regional Studies East Asia at Harvard’s Graduate School of Arts and Sciences and a Faculty Affiliate with the Project on Managing the Atom at Harvard Kennedy School. Dr. Park’s current research projects focus on nuclear proliferation, economic statecraft, Asian trade negotiations, and North Korean cyber activities. He previously directed Asia Track 1.5 projects at the U.S. Institute of Peace. He earlier worked at Goldman Sachs and The Boston Consulting Group. His publications include: “Stopping North Korea, Inc.: Sanctions Effectiveness and Unintended Consequences,” (MIT Security Studies Program, 2016 -- co-authored with Jim Walsh); and “Assessing the Role of Security Assurances in Dealing with North Korea” in Security Assurances and Nuclear Nonproliferation (Stanford University Press, 2012). Dr. Park received his M.Phil. and Ph.D. from the University of Cambridge. He completed his predoctoral and postdoctoral training at Harvard Kennedy School.

Dr. Smart is Chief Global Strategist and Head of the Barings Investment Institute. The Institute explores current macroeconomic and political dynamics, as well as the forces that shape long-term investment and capital decisions. Dr. Smart has worked in the investment industry since 1995, managing international and emerging markets strategies, and has also served as a senior economic policy official at the U.S. Treasury and the White House. Prior to joining the firm in 2018, Christopher was Senior Fellow at the Carnegie Endowment for International Peace and at the Harvard Kennedy School’s Mossavar-Rahmani Center for Business and Government. From 2013 to 2015, he served as Special Assistant to the President at the National Economic Council and the National Security Council, where he was principal advisor on trade, investment and a wide range of global economic issues. Dr. Smart also spent four years as Deputy Assistant Secretary of the Treasury, where he led the response to the European financial crisis and designed U.S. engagement on financial policy across Europe, Russia and Central Asia. Prior to his government service, he worked as the Director of International Investments at Pioneer Investments where he managed top-performing Emerging Markets and International portfolios. Earlier in his career, he was an advisor to the Russian Finance Ministry following the collapse of the Soviet Union. Dr. Smart holds a B.A. in History from Yale University and a Ph.D. in International Relations from Columbia University.

Professor Yoon is Professor Emeritus in the Department of Political Science and International Relations, Seoul National University. He served as Minister of Foreign Affairs and Trade of the Korean government from 2003 to 2004. Before he joined the faculty of Seoul National University in 1990, he taught at the University of California at Davis. He served as Korea’s Eminent Representative to, and co-chair of, the East Asia Vision Group II from September 2011 to October 2012. He has published several books and some 70 articles in the fields of international political economy, Korea’s foreign policy, and inter-Korean relations, some of which appeared in World Politics, International Political Science Review, Asian Survey, and Project Syndicate. Professor Yoon received his doctoral degree from the School of Advanced International Studies at Johns Hopkins University.