RESCHEDULED: "The Political Crisis in Yemen" with Steven C. Caton and Ross Porter 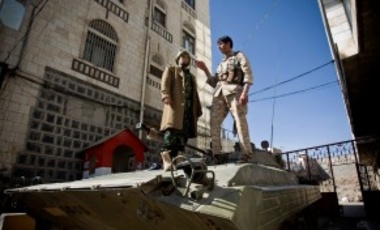 Prof. Caton and and Dr. Porter will provide a long historical overview of the country's current political dilemmas, looking not only at processes within the country but pressures and interferences from global players. It will then focus on more recent history involving the various groups in the Change Square Revolution (2011-2013) and how they splintered, leading to the current impasse.

*Light lunch will be provided

Steve Caton is a specialist on Arabic and the Middle East, with an emphasis on Yemen and the Arabian Peninsula. His earliest work was in anthropological linguistics and poetics which culminated in his first book, Peaks of Yemen I Summon (University of California Press, 1990), an ethnography of Arabic, oral poetry and political culture of a Yemeni highland tribe. Anthropological linguistics continues to be one of Caton’s main disciplinary interests, and is the focus of a combined graduate and undergraduate course on the subject every other year.

During the course of fieldwork for that research, a dispute broke out in the village in which he was living, and the event became the subject of Caton’s third book, Yemen Chronicle (Hill & Wang, 2005). It explores issues of event, time, and memory in his field research and ethnographic writing, which he now addresses in more theoretical work that engages anthropologists, historians and philosophers.

Ross Porter is a Visiting Researcher in the Anthropology Department at Harvard University, specializing in the social anthropology of political change in Yemen. He holds a Ph.D. in Social Anthropology from King’s College at the University of Cambridge. His dissertation, titled "'Being Change' in Change Square: An Ethnography of Revolutionary Life in Yemen," focused on the formation of revolutionary identities among protesters during Yemen’s 2011 uprising. He also holds an M.Phil. in Social Anthropology from King’s College and B.A. in History of Art and Archaeology from the University of London’s School of Oriental and African Studies. Dr. Porter has conducted extensive study on Yemeni culture and language, spending over 18 months of ethnographic fieldwork in Yemen in preparation for his dissertation and spending over three years studying Arabic at the Centre of Arabic Language and Eastern Studies at the University of Science and Technology in Sana’a, Yemen. Dr. Porter now joins Professor Steven C. Caton at Harvard University to advance his research on Yemen as a visiting research fellow.