Foreign researchers have increasingly leveraged advanced open source intelligence technology and cooperated across countries to track North Korea’s developments over the last 25 years.  But one country has been left out – China.  Are there open source Chinese analyses of DPRK ballistic missiles, do they align with U.S. assessments, and is there anything for other researchers to gain from reading these analyses?  This report by Nathan Beauchamp-Mustafaga and Dr. Scott W. Harold examines Chinese assessments of North Korean ballistic missile capabilities between 1998 and 2017.

The Korea Project acknowledges the generous support of the Korea Foundation for sponsoring this event. 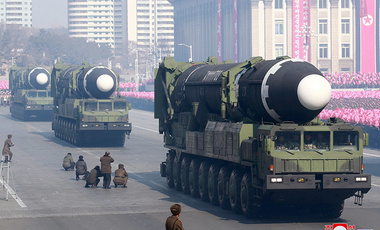 Dr. Scott W. Harold (Speaker)
Dr. Scott W. Harold is a Senior Political Scientist at The RAND Corporation, and an affiliate faculty member at the Pardee RAND Graduate School. He specializes in the foreign and defense policies of China, Japan, North and South Korea, and Taiwan.  Prior to joining RAND in August 2008, he worked at the Brookings Institution’s John L. Thornton China Center from 2006 to 2008. Dr. Harold is also an adjunct professor at Georgetown University, Columbia University, and the George Washington University.  From 2012-2017, he was a term member of the Council on Foreign Relations; he has also held visiting fellowships at the Mercator Institute for China Studies in Berlin, Germany in 2018 and Institut Montaigne in Paris, France in 2019. Dr. Harold’s doctorate is in political science from Columbia University, where he wrote a thesis on China’s foreign policy decision-making with respect to joining the World Trade Organization.

Dr. John Park  (Welcoming Remarks)
Dr. John Park is Director of the Korea Project at the Harvard Kennedy School’s Belfer Center. He is also a Faculty Affiliate with the Project on Managing the Atom at the Harvard Kennedy School and an Associated Faculty Member of the Korea Institute at Harvard University.  Dr. Park’s core research projects focus on the political economy of the Korean Peninsula, nuclear proliferation, economic statecraft, Asian trade negotiations, and North Korean cyber activities. He previously directed Northeast Asia Track 1.5 projects at the U.S. Institute of Peace. He advises Northeast Asia policy-focused officials in the U.S. government. Dr. Park earlier worked at Goldman Sachs and The Boston Consulting Group.  His publications include: “Stopping North Korea, Inc.: Sanctions Effectiveness and Unintended Consequences,” (MIT-Harvard study, 2016 – co-authored with Jim Walsh); “Assessing the Role of Security Assurances in Dealing with North Korea” in Security Assurances and Nuclear Nonproliferation (Stanford University Press, 2012); “North Korea, Inc.” (USIP Working Paper, May 2009). Dr. Park received his Ph.D. from the University of Cambridge. He completed his predoctoral and postdoctoral training at the Harvard Kennedy School.

Dr. Ariel Petrovics (Discussant)
Dr. Ariel Petrovics is a Managing the Atom and International Security Project Postdoctoral Fellow at the Harvard Kennedy School’s Belfer Center. Her research examines the effectiveness of foreign policy strategies on issues of international security. Dr. Petrovics’s book project compares foreign policy effectiveness for inducing nuclear reversal, while related research evaluates the risk of counterproductive consequences, engagement strategies with renegade regimes, and the effects of new proliferators on international security. Her work has been published for the Lawrence Livermore National Laboratory, in the Bulletin of Atomic Scientists, and in Texas National Security Review, among others. Dr. Petrovics earned her Ph.D. in Political Science from the University of California, Davis. She has held positions as a Stanton Nuclear Security Fellow, the IGCC Herbert York Fellow, and a research associate at the Lawrence Livermore National Laboratory’s Center for Global Security Research. Dr. Petrovics’s work has been supported by the Stanton Foundation and the Charles Koch Foundation.