Transition in Regime, State, and Society in the Arab World

Dr. Ghabra will talk about the challenges facing the Arab world today and identify these challenges in the context of the existing civil wars, violence, and injustices. The region will not be able to move away from the existing collapse without a new social political order that focuses on education, political and economic reforms, accountability of rulers, separation of powers, freedom of expression and justice. 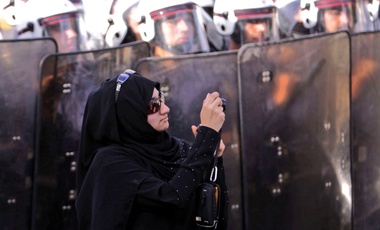 AP Photo/Hasan Jamali
In this Jan. 18, 2012 file photo, an anti-government protester stands in front of riot police while photographing other demonstrators in Manama, Bahrain.

Dr. Ghabra will talk about the challenges facing the Arab world today and identify these challenges in the context of the existing civil wars, violence, and injustices. The region will not be able to move away from the existing collapse without a new social political order that focuses on education, political and economic reforms, accountability of rulers, separation of powers, freedom of expression and justice.

Dr. Shafeeq N. Ghabra is Professor of Political Science at Kuwait University and the 2016-2017 Visiting Scholar at the Arab Center for Research, Qatar. He served as the founding president of the American University of Kuwait from 2003 to 2006, Director of the Kuwait Information Office in Washington, D.C. from 1998 to 2002, and the Center of Strategic Studies at Kuwait University from 2002 to 2003. He is the author of several books including Palestinains in Kuwait: The Family and the Politics of Survival (Westview Press, 1987) Kuwait and the Dynamics of State and Society (Afaq Books, in Arabic, 2011), and Unsafe life: The Generation of Dreams and Disappointments (Hayat Ghayr Amina) (Beirut, Saqi Books, 2012). His most recent publications include "Kuwait at the Crossroads" (Middle East Institute, 2013) and "The Egyptian Revolution of 2011" in the Routledge Handbook of the Arab Spring, edited by Larbi Sadiqi (London: Routledge Books, 2015). His forthcoming work includes The Nakbah and the emergence of the Palestinian Diaspora (Alnakbha wa Noshou’ al Shatat al Filistini) (Beirut: The Arab Center, in Arabic, 2017) and "Identity and State in the Gulf: The Case of Kuwait," in State, Citizens and Institutions, edited by Mark Thompson and Neil Quilliam (London: IB Tauris, 2017).

Dr. Ghabra completed his BA at Georgetown University in 1975, his MA at Purdue University-West Lafayyate in 1983, and his PhD at the University of Texas-Austin in 1987.