President Trump’s unconventional foreign policy appeared in disarray amid a series of setbacks around the globe and mounting signs that the president and his advisors were on the verge of losing several risky policy bets.

North Korea Summit Take 2: What, If Anything, Can Trump Accomplish?

President Donald Trump travels this week to Vietnam, where preparations are underway for his second summit with North Korean leader Kim Jong Un. But while he declared today that the summit would be “tremendous,” the meeting comes in the wake of last year’s meeting, after which Director of National Intelligence Dan Coates directly disagreed with the Trump’s exuberant claims that the North Korean threat had largely been erased. So if Trump and his own foreign policy team can't even agree on the problem, are we really right around the corner from a deal with North Korea?

Jim Braude was joined by former undersecretary of state and U.S. Ambassador to NATO, Nicholas Burns, now a professor at the Harvard Kennedy School of Government.

Nonetheless, my bottom line: 2019 promises more of the same. Where this conflict stands today is not good. But it is better than it was when Trump took office, and better than it would be under a Clinton administration following conventional wisdom.

Negotiating for Peace and Security on the Korean Peninsula

Former UN Secretary-General, Ban Ki-Moon (MPP ‘85) and former Acting Assistant Secretary for East Asian and Pacific Affairs, Susan Thornton, will discuss the negotiations for peace and security on the Korean Peninsula. This forum event will be moderated by Ambassador Nicholas Burns, Roy and Barbara Goodman Family Professor of the Practice of Diplomacy and International Relations and Faculty Chair of the Future of Diplomacy Project.

Former United Nations Secretary-General Ban Ki-moon and former top U.S. diplomat Susan A. Thornton discussed America’s role in the political future of the Korean peninsula before a packed audience at an Institute of Politics event Monday.

The event — entitled “Negotiating for Peace and Security on the Korean Peninsula” — was moderated by Harvard Kennedy School Professor R. Nicholas Burns, a former U.S. ambassador to NATO.

“It’s the Stuff of Greek Tragedy": How Trump Could Win the Peace and Lose the War

Taking a break from the Kavanaugh confirmation battle to reprise his role as peacemaker, Donald Trump offered an unqualified endorsement on Wednesday of the “tremendous progress” being made on the Korean Peninsula following a three-day summit between North and South Korea. “We had very good news,” he told reporters on the South Lawn of the White House. “They met, and we had some great responses.” On Twitter, Trump was even more effusive, calling the latest developments “Very exciting!”

The initial results of this week’s meeting between Kim Jong Un and South Korean President Moon Jae-in do offer hope that their two countries, which have been locked in a state of frozen conflict since 1953, will formally end the Korean War and begin a process of rapprochement. Kim reaffirmed his pledge to dismantle North Korea’s Tongchang-ri missile engine testing site and said he would consider shuttering its Yongbyon nuclear facility. Moon and Kim agreed to resume economic cooperation between the Koreas—including reconnecting rail and road links—and reached an agreement that will ease tensions on the North-South border and in the Yellow Sea. Secretary of State Mike Pompeo, who had canceled a trip to Pyongyang last month amid a breakdown in negotiations, quickly declared his intention to re-engage.

Trumplomacy – North Korea, Iran, and Beyond

In the wake to the highly anticipated encounter between U.S. President Donald Trump and North Korea’s leader Kim Jong Un in Singapore, the Center for International Security and Governance hosted a lecture and panel discussion with Cathryn Clüver Ashbrook, Executive Director of the Future of Diplomacy Project at the Harvard Kennedy School, on June 14th 2018. Dr. Enrico Fels, who was also scheduled to participate in the panel discussion, regrettably had to cancel his participation last minute due to personal reasons.

“I Don’t Expect Bolton to Last Much Longer”: How Mike Pompeo Won the Trump-Kim Summit

After the crucible of the Trump-Kim summit, it seems clear that Pompeo has been elevated, and Bolton diminished, by the president’s sudden love affair with Pyongyang. 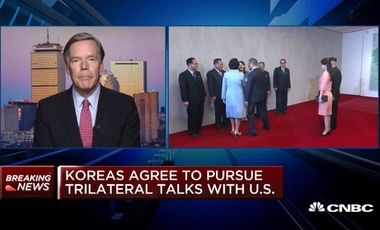