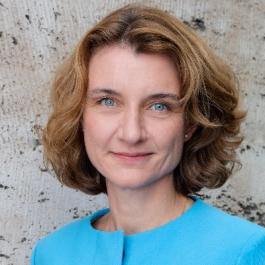 Dr. Daniela Schwarzer is currently the director of the German Council on Foreign Relations (DGAP). She serves also as a Special Adviser on the international role of the European Union to the High Representative of the Union for Foreign Affairs and Security Policy/Vice-President of the Commission for a Stronger Europe in the World, Josep Borrell. Previously, she was a member of the executive team of the German Marshall Fund of the United States (GMF), serving as its senior director of research, as well as heading its Berlin office and Europe program. Prior to her work at GMF, Schwarzer spent eight years at the German Institute for International and Security Affairs (SWP), where she led its research group on European integration from 2008 to 2013. During this time she advised Poland and France during their respective EU Council presidencies, served as a consultant to the Centre d’Analyse Stratégique for the French prime minister, and was a member of the “Europe” working group of the Whitebook Commission on Foreign and European Policy. Before joining SWP, she worked as an opinion page editor and France correspondent for Financial Times Deutschland.

She has held a senior research professorship at Johns Hopkins University’s School of Advanced International Studies (SAIS) in Washington, DC/Bologna since 2014 and was a Fritz Thyssen Fellow at Harvard University’s Weatherhead Center for International Affairs in 2012–13. She taught for several years at the Hertie School of Governance and has lectured at the Collège d’Europe in Bruges, the Institute of European Studies of Macau, and the Universität Salzburg. In addition, she serves on the advisory boards of the European Council on Foreign Relations (ECFR) and the Jacques Delors Institute in Paris and is a non-executive board member of BNP Paribas.

Schwarzer holds a Ph.D. in political economy from Freie Universität Berlin, co-supervised by the London School of Economics. She completed her master's in political science and in linguistics at the University of Tübingen after having studied in Germany, the U.K., and France. In addition to her native German, Schwarzer speaks fluent French and English, and has a working knowledge of Italian.