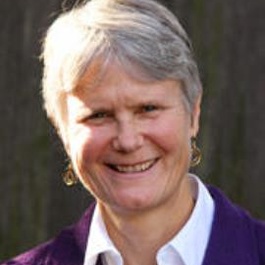 Diane L. Moore is the Founding Director of the Religious Literacy Project, a Senior Fellow at the Center for the Study of World Religions, and a Lecturer in Religion, Conflict, and Peace at the Harvard Divinity School. She focuses her research on enhancing the public understanding of religion through education from the lens of critical theory.

She is currently serving as the Principal Investigator for the Religious Literacy and the Professions Symposium Series, and the recently completed Religious Literacy and Humanitarian Action Research Project in partnership with Oxfam and funded by the Henry Luce Foundation. The report entitled "Local Humanitarian Leadership and Religious Literacy" can be read online. She also served on a task force at the U.S. State Department in the Office of Religion and Global Affairs in the Obama Administration to enhance training about religion for Foreign Service officers and other State Department personnel.

Moore is the Lead Scholar for the six module, Massive Open Online Course (MOOC) through HarvardX entitled World Religions Through Their Scriptures and the Professor for the first module in the series entitled Religious Literacy: Traditions and Scriptures. The first version of the course launched in 2016, and the second version was launched in the spring of 2018 with an added module on Sikhism. She prepared a new MOOC entitled Religion, Conflict and Peace that was launched early in 2018.

Regarding her work in education and with educators, Moore chaired the American Academy of Religion's Task Force on Religion in the Schools, which conducted a three-year initiative to establish guidelines for teaching about religion in K-12 public schools that were published in 2010, and was on the writing committee for the new National Council for the Social Studies supplement to the College, Career, and Civic Life Framework (C3) document on Religious Studies. She is currently serving as Co-Chair along with Eugene Gallagher of a five-year initiative of the American Academy of Religion to establish guidelines for what graduates of two- and four-year degree programs in the U.S. should know about religion. She is the coordinator for the Religious Studies and Education Certificate, and her book Overcoming Religious Illiteracy: A Cultural Studies Approach to the Study of Religion in Secondary Education was published by Palgrave in 2007. She serves on the editorial boards of the journals Religion and Education and the British Journal of Religious Education.

In 2014 she received the Petra Shattuck Excellence in Teaching Award from the Harvard Extension School and the Griffiths award from the Connecticut Council for Interfaith Understanding for her work promoting the public understanding of religion. In 2005–06 she was one of two professors chosen by Harvard Divinity School students as HDS Outstanding Teacher of the Year. Moore was also on the faculty at Phillips Andover Academy in the Department of Philosophy and Religious Studies until 2013. She is an Ordained Minister in the Christian Church (Disciples of Christ).