China's Calculus After the INF Treaty

It seems that the Intermediate-Range Nuclear Forces (INF) Treaty is coming to an end. The Treaty prohibits the United States and Russia from possessing, producing or testing land-based ballistic and cruise missiles with ranges of 500–5500 kilometres, including both conventional and nuclear-armed missiles. On 1 February 2019, US President Trump said that he would suspend obligations under the INF Treaty and initiate the withdrawal procedure. After withdrawing, the United States might deploy conventional and nuclear missiles to the West Pacific against China. How would the potential deployment of each missile type impact China’s security?

The Future of the Nuclear Order

Foreign policy pundits have bemoaned the unraveling of the post-World War II international order in recent years, describing threats to the multilateralism and liberalism enshrined in postwar institutions. An often overlooked component of that structure is the global nuclear order, which, like other parts of the postwar system, was created for magnanimous and selfish aims: reducing the dangers of nuclear weapons for all and serving the interests of the world’s most powerful states.

In recent decades, the nuclear export market has observed a marked shift of demand from traditional customers in the Western world to Asia. The lack of projects in the United States, the delay in the French construction of advanced reactors, and the Fukushima accident in Japan have also led to the declining export capabilities of their companies. In contrast, Russia has gained numerous contracts, and China will likely become another major exporter. In this paper, the evolution of the market was examined from both the supply and demand sides with issues including the more concentrated and uncertain market, the lack of full participation by emerging suppliers to the nonproliferation regime, and the lesser governance capabilities of the newcomers. Addressing these issues, a range of policy suggestions was made, including the reinforcement of market shares of Western suppliers, the encouragement of newcomers to adhere to international norms, and a better safeguards contribution scheme. 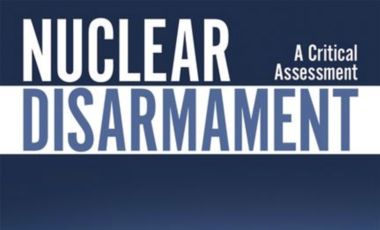 Dim Hope for Disarmament and Approaching Risk of Build-Up

Further nuclear reduction under the current regimes seems unlikely. The US argues that Russia has violated the INF Treaty by developing and deploying a land-based cruise missile. Russia also makes the accusation that the Aegis Ashore missile defense system in Europe, capable of launching cruise missiles, has violated the INF. Furthermore, President Trump has repeatedly expressed his unwillingness to extend the New START Treaty for five more years after it expires in February 2021. The US-Russia bilateral disarmament process seems to have terminated. There have been some signs of nuclear build-up. The new US Nuclear Posture Review emphasizes the role of nuclear weapons while de-emphasizing strategic stability, reduces the threshold for nuclear use and calls for developing new low-yield SLBM and sea-launched cruise missiles. America’s nuclear policy might stimulate Russia and China to build new nuclear capabilities. North Korea’s advances in nuclear and long-range missile programs justify Washington’s investment in homeland missile defense, which in turn undermines China and Russia’s nuclear retaliatory capability and might result in a defense-offense arms race.

Can This New Approach to Nuclear Disarmament Work?

An estimated 14,485 nuclear weapons exist on earth today — most are far more powerful than those that twisted railway ties, leveled buildings, and crushed, poisoned, and burned human beings in Hiroshima and Nagasaki. The majority of these weapons belong to the United States and Russia. For some in the U.S. government, including Chris Ford, assistant secretary at the State Department’s Bureau of International Security and Nonproliferation, this number represents significant disarmament progress since Cold War highs of over 70,000 nuclear weapons. They argue the current security environment means that further reductions are not possible at this time. In contrast, for many disarmament advocates and officials from non-nuclear weapons states, this number is still far too high. They are now clamoring to ban all nuclear weapons. Because of this divide, according to Ford, we currently face a “disarmament crisis.”

Although South Korea adopted nuclear energy later than countries like the United States, Russia, or France, the country, until recently, has been considered to have one of the most successful civil nuclear power programs in the world, with a fully-devel- oped supply chain, a remarkable record in constructing and operating nuclear power plants (NPPs), and the ability to compete and win contracts to supply NPPs abroad. The fortune of South Korea’s nuclear program has seemingly come to an end, however, with the election of Moon Jae-in. The new South Korean President promised to reduce the country’s dependence on nuclear energy, and has, since taking office, implemented measures to phase out this type of electricity generation.

In this paper, following a brief history of the development of nuclear energy in South Korea, the root causes that instilled public distrust of nuclear energy and Moon Jae-in’s phase-out policy are discussed. Subsequently, by analyzing the validity of Moon’s plan, I argue that this phase-out policy is not beneficial for the long-term sustainability of South Korea’s economy in general, and of the Korean nuclear industry in particular. The paper concludes with policy recommendations for a more balanced nuclear policy that can accommodate public opinion and, at the same time, ensure energy security and provide other economic and diplomatic benefits.

The operation of the fleet of Chinese floating nuclear power plants in the South China Sea carries with it numerous safety and security risks that may have widespread consequences to not only China but also to Southeast Asia and beyond.

Over the past few weeks, BTS members have found themselves entangled in a bizarre scandal over an “atomic bomb shirt” that led to the cancellation of their appearance on a popular TV Asahi music show in Japan, which has been the main foreign source of revenues for K-pop groups since the 1990s. The 23-year-old singer, Jimin, was caught on the street wearing a white t-shirt bearing the slogan “Patriotism Our History Liberation Korea” repeated in numerous lines and overlapped by a black-and-white picture of the mushroom cloud from the atomic bomb that the United States detonated over Nagasaki, Japan on August 9, 1945. 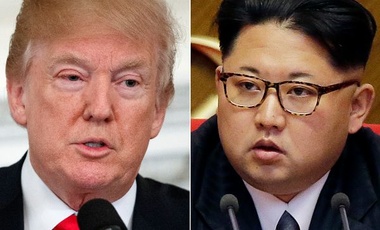 A Roadmap for the Day After the Trump-Kim Summit

President Trump surprised almost everyone—probably not the least Kim Jong-un—when he agreed to meet the North Korean leader at the end of May (now maybe early June). By accepting Kim’s invitation, President Trump overturned decades of conventional wisdom on how to separate North Korea from its nuclear and other WMD programs. If Trump and Kim meet—as of now this is still a big “if,” although North Korea has now confirmed its willingness to meet directly—the summit could be an important ice breaker and open up a chance to resolve the North Korean nuclear crisis and bring peace to the Korean peninsula. But success, however remote it may seem, will require new thinking and entail major risks. It will also require a plan. 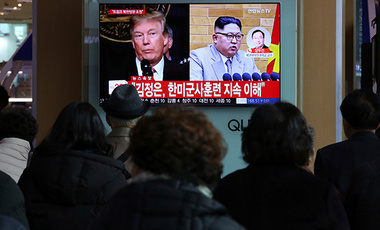 Why the United States Might Accept a Nuclear North Korea

Many Americans were aghast at President Trump’s announcement this month that he would meet with North Korean dictator Kim Jong Un.

But in moving toward diplomacy, Trump is following in the steps of previous presidents. If he continues down their path, the end result would be a deal that allows Pyongyang to keep its nuclear weapons — not because Trump gets taken in by Kim, but because such a deal boosts American interests. Since World War II, the United States has labored to prevent nuclear weapons from spreading. But once a country has them, Washington ultimately accommodates it, opting to develop some kind of diplomatic influence, if not control, over other nuclear powers, instead of going to war.