Twenty-four Harvard Kennedy School students recently returned from the Arctic Circle Assembly in Reykjavík—the world’s largest annual gathering on Arctic issues—where each presented her or his innovative and interdisciplinary solution to an Arctic challenge. These “Arctic Innovators” are part of Harvard Kennedy School’s Arctic Initiative, which is co-led at the Belfer Center by John P. Holdren, Henry Lee, and Halla Logadóttir. Focused on policy responses to the challenges posed by rapid climate change in the Arctic, the Initiative has recently secured new outside funding totaling $3 million to cover programs over the next three years.

The Initiative’s Arctic Innovators program was established three years ago with the goal of bringing creative young scholars into the expanding international discussion of Arctic issues, both to educate them about this fast-changing region and its impacts on the rest of the globe and to assist them in learning to develop and implement sustainable solutions. This year the program included a Kennedy School class titled, “Policy and Social Innovations for the Changing Arctic,” which was co-taught by Logadóttir and Holdren. The 24 students admitted to the limited-enrollment module came from HKS, the wider Harvard campus, MIT, and the Fletcher School at Tufts.

Each student in the class developed an idea for tackling a pressing Arctic challenge, drawing on class lectures and discussions and meetings with policymakers. As the culmination of their work, they pitched their ideas at the “Innovation Lab” hosted by the Arctic Circle Assembly.

During their field study in Reykjavík, students also had the opportunity to network and discuss their ideas with Arctic leaders, including the President of Iceland, H.E. Guðni Th. Jóhannesson. Upon their return to the U.S., they met with former UN Secretary-General Ban Ki-moon, who underscored the urgency of the climate change challenge and encouraged the students to sustain their interest in addressing it.

The leaders of the Arctic Initiative are optimistic about its future in research, policy, and training around the challenges posed by climate change.

“The Arctic region is changing rapidly, with impacts from local to global. Innovation is needed in government policies on all levels and in the actions of businesses and individuals in order to find enduring solutions for all,” Logadóttir said. 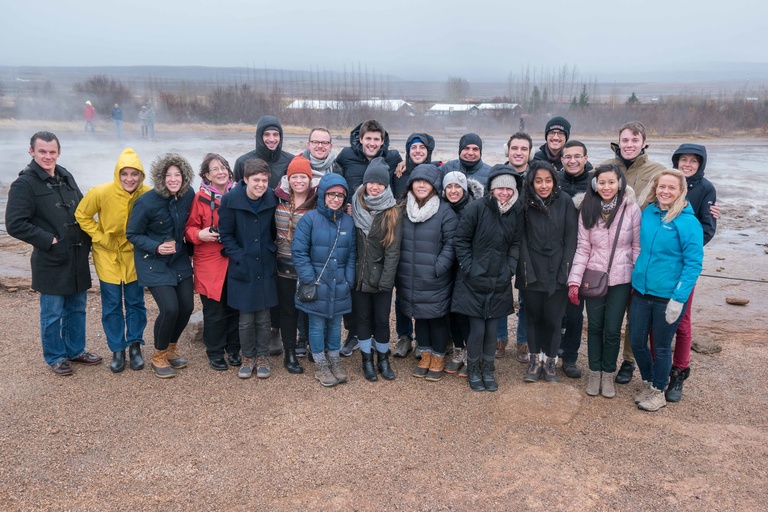 Students visited geyers and some of Iceland’s other natural attractions after presenting their ideas at the Arctic Circle Assembly. Photo taken by Bennett Craig, Multimedia Producer for Communications at the Belfer Center.