Competition and Collaboration With a Rising China

Whether they regard it as competitive, cooperative, or confrontational, virtually all observers agree that the U.S.-China relationship is consequential. From cyber norms and AI to military tensions in the Taiwan Strait and the global struggle to turn the tide on climate change, how Washington and Beijing manage their shared future will shape the globe for decades to come.

That’s the impetus behind a major new report series from Graham Allison and his research team that evaluates key dimensions of China’s power. On the more collaborative side of the scale, John P. Holdren, Henry Lee, Dan Schrag, and others are working with China’s top scientists on critical energy and climate issues.
Read more »

Also in This Issue

Learning from the Past »

Hot off the Presses » 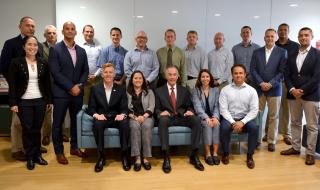 Each year, the Belfer Center welcomes more than a dozen U.S. military officers and civilian officials for a year of research and discussions with top military and government leaders. This year, these National Security Fellows are getting special mentoring from Belfer Center Senior Fellow and former Chairman of the Joint Chiefs of Staff General Joseph F. Dunford, Jr. (ret.).
Read more » 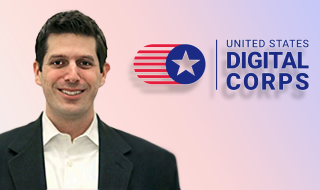 With the launch of the U.S. Digital Corps this summer, the Biden administration signaled a desire to attract early-career technologists and put their skills to work in the federal government. Nick Sinai, Senior Fellow with the Technology and Public Purpose Project and co-founder of the U.S. Digital Corps, describes the origins of the Corps.
Read more » 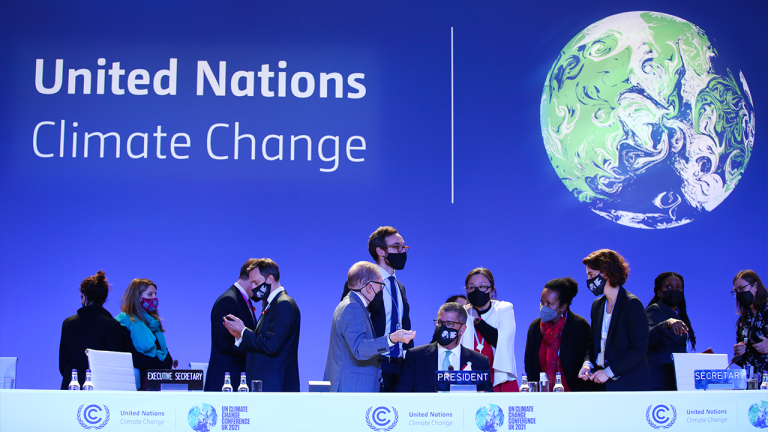 Following the high-stakes COP26 climate conference in Glasgow, we asked climate experts Laura Diaz Anadon, John P. Holdren, Henry Lee, Halla Hrund Logadóttir, and Robert Stavins for their perspectives on the conference. What were the major successes of COP26 and what steps should the international community take now?
Read more » 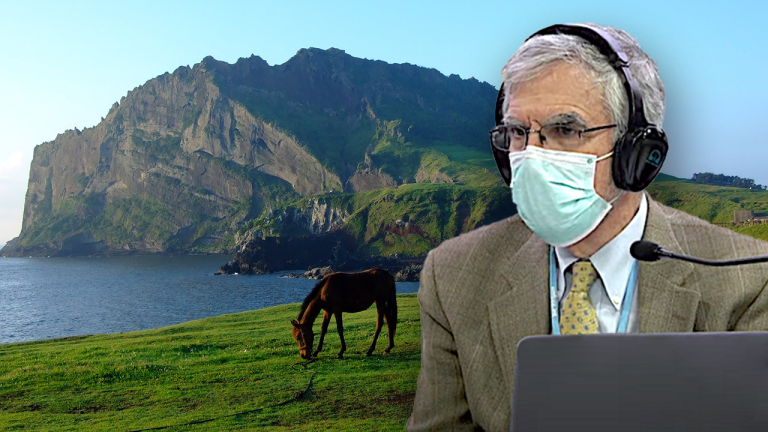 Robert Stavins and his team from the Harvard Project on Climate Agreements led a side event at COP26 focusing on collaboration in meeting climate goals. The event focused on the dramatic actions underway on the island of Jeju, off the coast of South Korea. The small island is taking immediate actions to become carbon neutral by 2030.
Read more »

Warming at three times the global average, the Arctic serves as a bellwether for the world on climate impacts and mitigation. Arctic Initiative leaders and students shared critical research and innovative ideas and insights at the 2021 Arctic Circle Assembly and at COP26. Learn more about Arctic Initiative activities at the Arctic Circle Assembly in Iceland and at COP26 in Glasgow.

Chris Krebs, Senior Fellow with the Cyber and Homeland Security Projects and head of the U.S. Cybersecurity Infrastructure Security Agency during the 2020 elections, joined Joan Donavan, Research Director for Harvard Kennedy School’s Shorenstein Center, to discuss the dangerous mis and disinformation being spread today and how to ensure safe and secure elections in 2022.
Watch the discussion »

An Inside Look at Havana Syndrome

A victim of the mysterious neurological attacks on members of the U.S. intelligence and diplomatic communities joined the Belfer Center’s Intelligence Project to discuss the attacks, their effects, and possible solutions. Marc Polymeropoulus described the horrendous middle of night assault and his difficulties in getting treatment for what was diagnosed as a traumatic brain injury.
See event highlights and the full report » 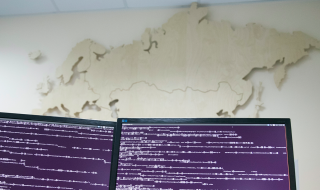 Can U.S.-Russia Cyber Rules of the Road Work?

Amid growing U.S.-Russia tensions in the cyber domain, the Cyber Project and U.S-Russia Initiative to Prevent Nuclear Terrorism looked into a possible “rules of the road” agreement to regulate cyber actions and minimize conflict, including potential nuclear conflict.
Read the research paper » 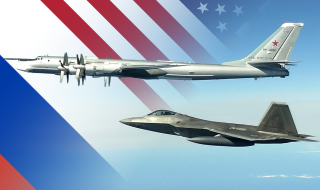 In both the U.S. and Russia, defense industries have a major impact on policymaking. In articles published by Russia Matters, American and Russian scholars provide insightful views about this influence.
Read more »

Learning from the Past 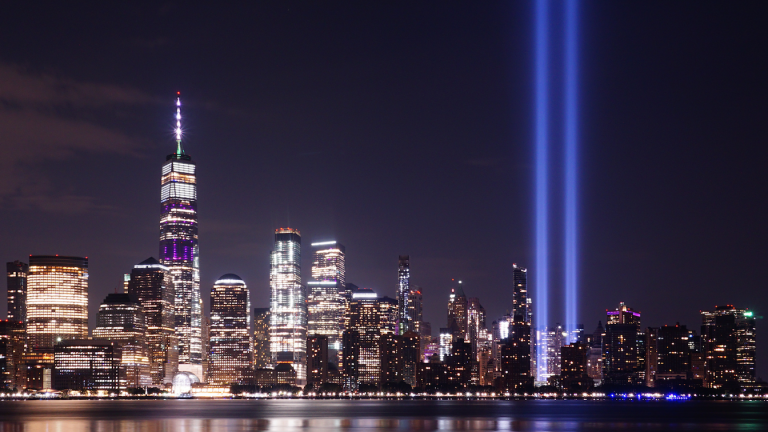 9/11: Intelligence and National Security Twenty Years Later, a full-day conference hosted by the Intelligence Project, looked back at the day of the attacks 20 years ago to better understand the impacts of that day through personal stories, policy reflections, and consideration of the long-term effects on American society.
See event highlights and the full report »

Afghanistan: What Happened and What's Next? 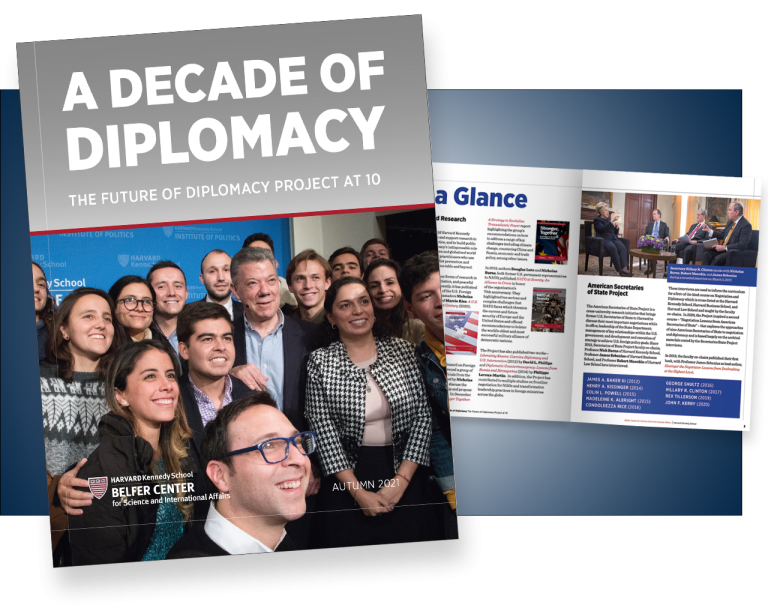 In this 10-year retrospective on the Future of Diplomacy Project, established and led by Nicholas Burns, several of the Project’s high-profile former fellows reflect on the geostrategic challenges ahead for statecraft and offer advice to the rising generation of diplomats. This publication also highlights the more than 350 global leaders who have visited and engaged with the community over the past decade—and the Project’s American Secretaries of State Project, which has interviewed nearly all living former U.S. Secretaries of State.
See the publication » 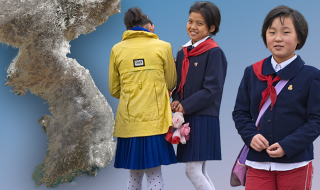 The North Korean nuclear threat remains one of the most persistent and complex foreign policy issues facing the United States. This paper by Center Fellow Jieun Baek looks at public diplomacy—activities intended to understand, inform, and influence the North Korean people—as an essential tool in achieving U.S. objectives on the peninsula.
Read more » 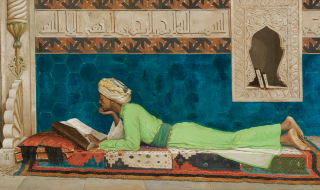 Kuwait Foundation Scholar Sultan Al Qassemi recently led a study group on the connections between politics and art in the Arab world and what those intersections mean for the future of the Middle East. It is essential, he believes, “to consider the cultural dynamics that influence political and social spheres.”
Read more » 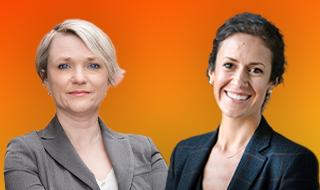 The impact of war and conflict on civilians is a concern shared by Professor Zoe Marks and International Security Program Fellow Charli Carpenter. We asked them how the withdrawal of troops from Afghanistan is affecting Afghan women and what kind of help would most likely be welcomed by women in all conflict areas.
Read more » 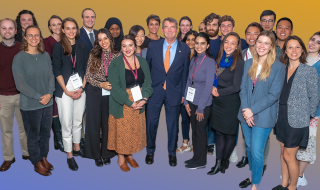 Harvard Kennedy School (HKS) students selected as Belfer Young Leader Student Fellows for this academic year are working with faculty and research projects and taking part in Center activities to gain expertise and leadership skills. We asked those  who will graduate this spring to tell us something about themselves, their goals, and special experiences while at HKS.
Read more » 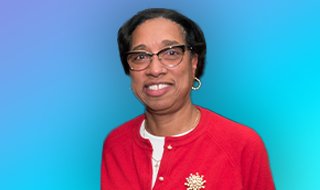 Whether she’s examining spreadsheets, organizing an event for her town’s community center, or cruising New England’s scenic byways on her Harley Davidson, Financial Associate Lovita Strain is known for bringing a smile—and a big heart—to everything she does.
Read more »

Hot off the Presses 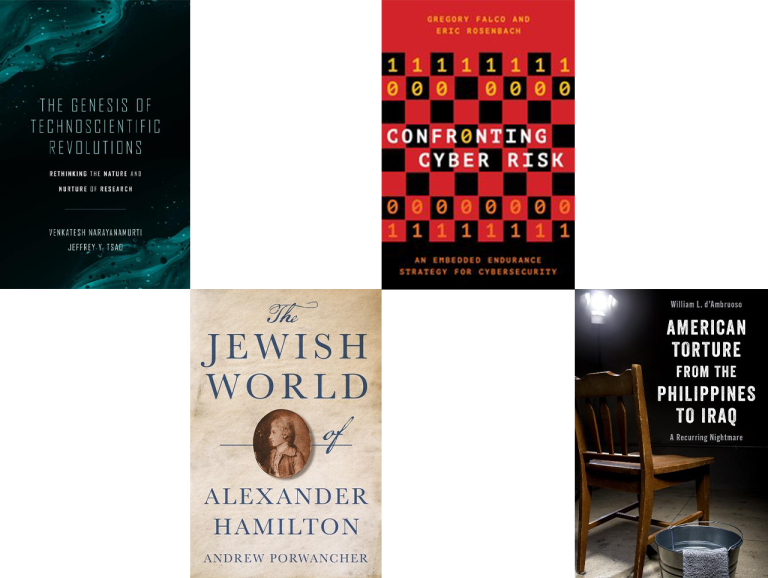 American Torture from the Philippines to Iraq
William d’Ambruoso 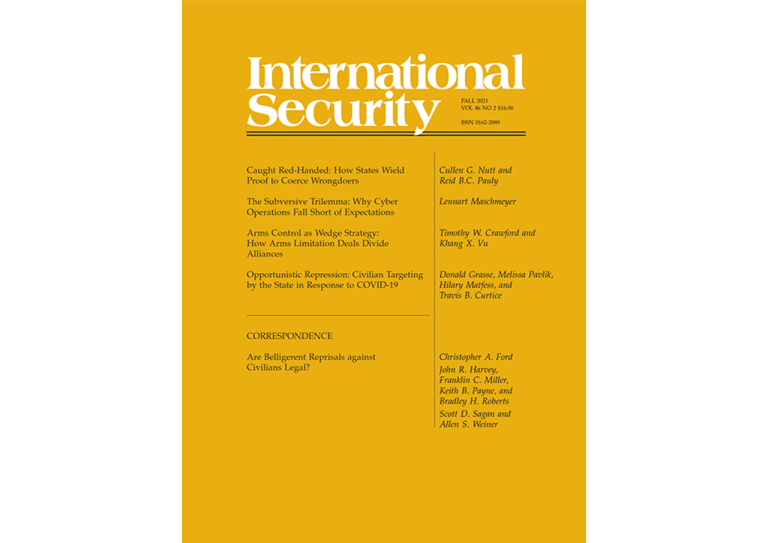 Hosted by Josh Burek, Immutable is a curiosity-centered guide to the emerging blockchain-based economy. From smart contracts to stable coins and NFTs, Immutable explores the challenges and opportunities of a new era—and the pioneers who are shaping it.
Read more » 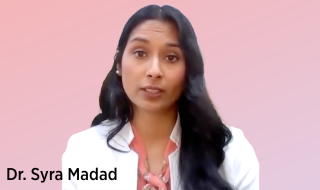 All photos and graphics by Belfer Center unless otherwise noted.