Students and judges celebrate their participation in the Arctic Innovation Lab at the Arctic Circle Assembly on October 13, 2022.

Climate Innovation on Display at the 2022 Arctic Circle Assembly 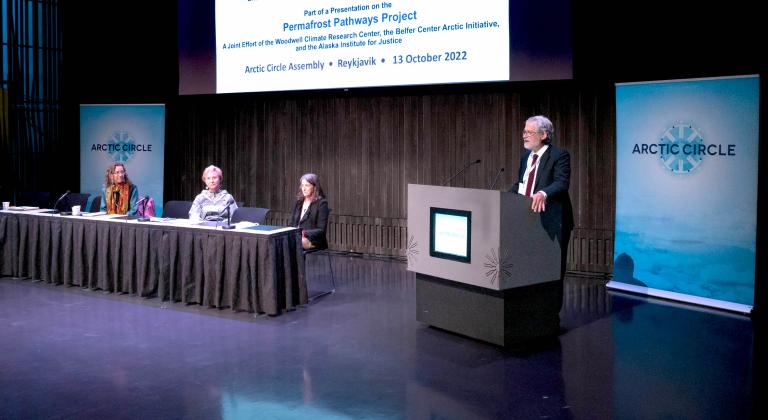 Arctic Initiative Co-Director John Holdren (at podium) presented about the impacts of carbon emissions permafrost thaw on the global climate during the Permafrost Pathways session. HKS student Vic Hogg also appreciated the opportunity to learn from Patricia Cochran (seated, center), project partner and Director of the Alaska Native Science Commission: “It was incredible to witness such a seasoned Indigenous leader sharing photos and stories about what is really going on in her community on a global stage.” (Photo: Elizabeth Hanlon)

The Arctic Initiative organized four sessions at this year’s Assembly. “Permafrost Pathways: Connecting Science, People, and Policy for Arctic Justice & Climate” introduced the Permafrost Pathways project that was launched earlier this year by the Woodwell Climate Research Center, the Arctic Initiative, and the Alaska Institute for Justice, which brings together leading experts in climate science, policy action, and environmental justice to inform and develop adaptation and mitigation strategies to address permafrost thaw.

During “The Arctic During the Global Pandemic: What Have We Learned?,” a panel session co-organized with the Icelandic Arctic Cooperation Network, Arctic Yearbook, and ARCTICenter, Senior Fellow Jennifer Spence presented a meta-analysis of research related to COVID-19 in the Arctic. Spence will co-chair the editorial board of a forthcoming Arctic Yearbook special volume, “Arctic Pandemics: COVID-19 and Other Pandemic Experiences and Lessons Learned,” which will provide insights and advice to inform pandemic preparedness and management and contribute to Arctic resilience.

In his remarks at the Arctic Circle Assembly, Harvard Kennedy School Dean Doug Elemendorf recalled his initial meeting with Halla Hrund Logadóttir, during which she convinced him of the necessity of “an Arctic initiative at Harvard Kennedy School...if Harvard was to serve the world as it could and should.”

During a plenary session, Harvard Kennedy School Dean Douglas Elmendorf presented an overview of Harvard Kennedy School’s ongoing work on climate and the Arctic. "Young people are demanding more education on climate change and especially on regions that will change the most, such as the Arctic," said Elmendorf in his remarks. Through the Arctic Initiative’s research, collaboration with partners, the Arctic course, and engagement with faculty and other experts, the Initiative supports students “to understand the crucial issues facing the Arctic.”

The fruits of the Arctic Initiative’s efforts to train the next generation of interdisciplinary, solutions-oriented Arctic leaders were on full display at the Arctic Innovation Lab, where students from six collaborating universities pitched their solutions to Arctic challenges to an audience of over 150 attendees. HKS students Isaac Kim and Vic Hogg earned high praise for their proposals, respectively entitled “The Anna Tobulek and Molly Hootch Fellowship Program” and “Capacity Building within Alaska Native Communities for Land Co-Management.” Senior Fellow Douglas Causey and Dean Elmendorf served as judges alongside Alice Rogoff, the publisher of ArcticToday and a member of Arctic Initiative’s Advisory Board; Anders Oskal, Secretary General of World Reindeer Herders and Executive Director of the International Centre for Reindeer Husbandry; and Jón Atli Benediktsson, Rector of the University of Iceland.

“It was inspiring to see young Arctic leaders with such a broad variety of ideas,” said Hogg about participating in the Lab. “I was also moved by Halla Logadóttir’s remarks that she met some of her greatest professional allies at youth gatherings just like the one we were attending. I wonder if I might find myself working alongside some of my peers who presented one day.”

Throughout the Assembly, students had the opportunity to network and discuss their ideas with Arctic leaders, including the President of Iceland, Guðni Thorlacius Jóhannesson, during a visit to the President’s residence. Dean Elmendorf, John Holdren, and Halla Logadóttir also conducted a series of high-level meetings with policymakers from Arctic and near-Arctic states, including Iceland’s Prime Minister Katrín Jakobsdóttir.

Logadóttir, who currently serves as Director-General of Iceland’s National Energy Authority, led a field visit for the HKS delegation to the Hellisheiði Geothermal Power Plant. After a briefing by Logadóttir on the history of Iceland’s energy transition, the team toured ClimeWorks and Carbfix, the carbon capture, storage, and sequestration pilot projects at the Hellisheiði Geothermal Power Plant. It was an example of the cutting-edge energy and climate research and innovation taking place in Iceland, which runs on 85% renewable energy - and of a scalable solution the students could take with them back to Harvard Kennedy School and beyond.