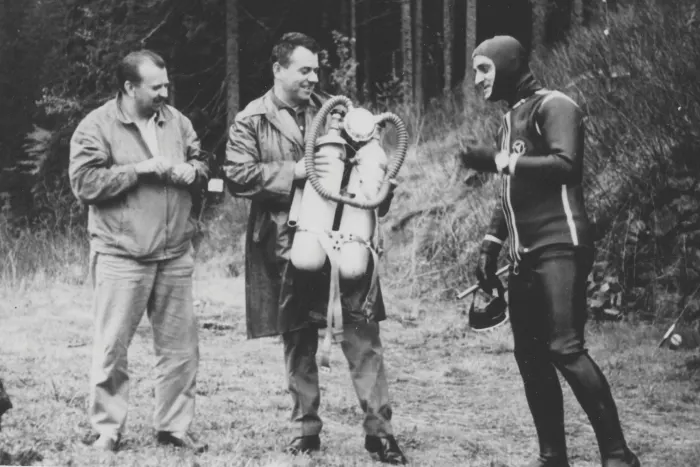 Larry Bittman in scuba gear at Black Lake in May 1964.

The opening of former Soviet and Eastern Bloc archives allows fresh light to be cast on Soviet disinformation against Western countries during the Cold War. One such disinformation operation, revealed in now-opened archives of the StB, the former Czechoslovakian intelligence service, was codenamed "NEPTUNE."

In May 1964, the StB conceived and carried out this aptly-named operation. It involved hiding forged Nazi documents at the bottom of a lake in Bohemia, which were then "accidentally" discovered, publicized, and used to discredit the West German government. The nature of operation NEPUTNE is disclosed in the StB's archives in Prague and in an interview that this blog's author, Calder Walton, conducted with the StB architect of the operation, Ladislav (Larry) Bittman, shortly before his passing in September 2018.

Bittman was a senior StB disinformation officer, who defected to the United States in 1968 after a crisis of faith about the brutality of the Soviet regime; that is, after witnessing Soviet tanks roll into Prague in April 1968. After his defection to the United States and extensive debriefing by the CIA, Bittman dedicated his life to studying the threats posed to democracies by disinformation, testifying in Congress about it, publishing books, and teaching courses on the subject at Boston University.1

In later life, Bittman became a painter in the seaside town of Rockport, Massachusetts, where I tracked him down. Reflecting on his previous career as a "professional manipulator of public opinion," Bittman stated that although today's technology and media landscape had changed beyond recognition, the underlying strategy of state-sponsored disinformation had not. The tools of disinformation had altered with social media, but not its purpose. Understanding how past disinformation campaigns like NEPTUNE worked is key to appreciating their successors today.2...