Last month, the Washington Post broke the news that the Trump administration was considering conducting the first U.S. nuclear test explosion since 1992. The administration seems to believe that a test would help gain concessions from China and Russia in nuclear arms control negotiations. Analysts quickly highlighted potential downsides of renewed testing. They range from arms racing and nuclear proliferation to environmental damage and even eroding Democratic Congressional support for nuclear modernization. Others have drawn attention to the success of the Stockpile Stewardship Program, which uses high-performance computing, subcritical and hydrodynamic testing, and laser physics experiments to ensure the U.S. arsenal is safe, secure, and reliable without nuclear explosive testing.

Yet, little has been written concerning how the public feels about nuclear tests. There has been speculation that a test would be particularly contentious in Nevada and Utah. It's true that a test would take place at the Nevada National Security Site and both Nevada and Utah have communities of "downwinders"—people exposed to radiation from past nuclear tests. But two essential components are missing from this picture. The first is hard polling data. The second is the public view from countries Washington has pledged to protect with its nuclear weapons.

What the Public Thinks

The first bar graph displays attitudes about nuclear tests in the United States and nine allied countries. We asked each survey respondent if they would approve "if my country or an ally tested nuclear weapons today." Our results show that nuclear testing is dramatically unpopular in every country. The margin of error for each survey is between +/- 3 to 4 percent. It also should be noted that public attitudes in Sweden, a NATO partner, mirror those in its European neighbors (15.1 percent approve, 84.9 percent disapprove). 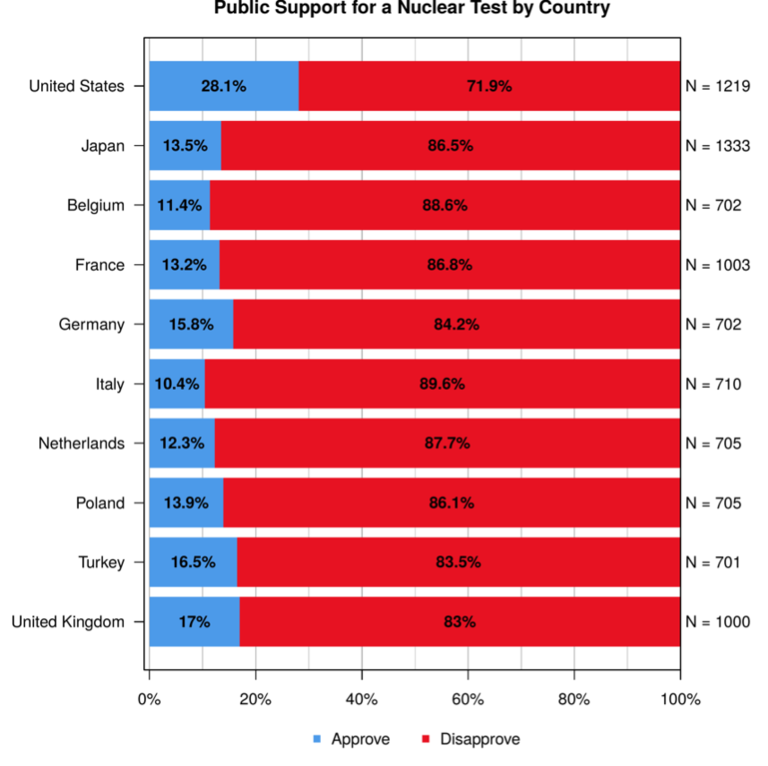 Americans are the most supportive population, but even so, only 28.1 percent would approve of conducting a nuclear test. A strong majority of 71.9 percent disapprove. This result is broadly consistent with 2016 and 2018 survey data indicating a majority of the U.S. public would support their country ratifying the CTBT and permanently closing the door on testing. Despite President Bill Clinton being the first world leader to sign the treaty in 1996, the U.S. Senate voted against ratification 48–51 in 1999, largely along party lines. Unlike the other countries we surveyed, the United States remains outside the test ban. It is one of eight "nuclear-capable" states that must ratify before the CTBT can enter into force. A U.S. return to testing would be a significant setback to this arms control objective. 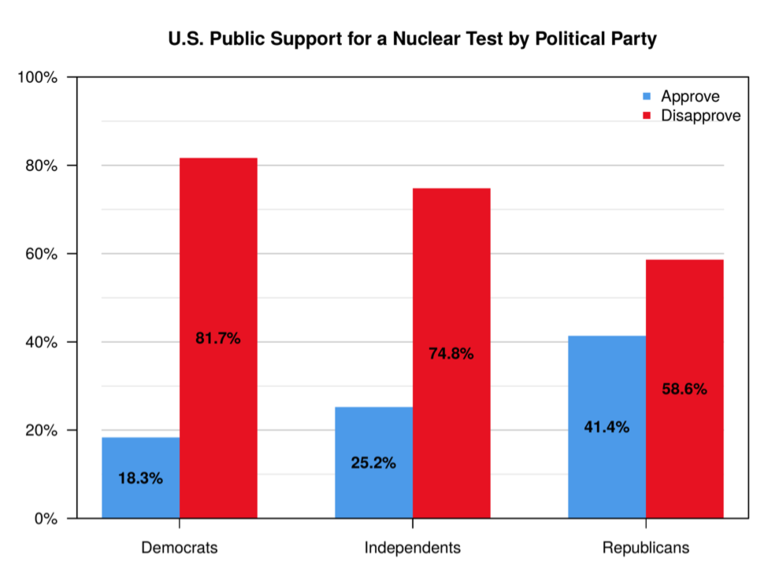 We also looked at partisan politics in the United States surrounding a nuclear test. The second bar graph displays those results. A majority of Democrats, Independents, and Republicans don't want to see further nuclear testing. While the disapproving majority of Democrats (81.7 percent) is predictable, numbers for Independents (74.8 percent) and Republicans (58.6 percent) should be cause for concern for President Donald Trump. A plan to restart nuclear testing would almost certainly hurt Republican prospects in an election year and political capital beyond then.

Unsurprisingly, 86.5 percent of the Japanese public would not support nuclear testing. The United States is Tokyo's closest ally, but Japan also lives with the legacy of the horrors of Hiroshima and Nagasaki. A recent poll by NHK, the national broadcaster, revealed that 65.9 percent of respondents want Japan to join the Treaty on the Prohibition of Nuclear Weapons and its global ban on nuclear arms. Attitudes opposing a U.S. nuclear test are prominent in Japan even with the threat presented by North Korea and the Trump administration's belief that a "rapid test" would put arms control pressure on China.

Britain and France are nuclear-armed NATO states. Consequently, survey respondents from Britain and France asked about a nuclear test by "my country or an ally" might have considered their home countries, the other country, or the United States. Likewise, respondents from across NATO could have the same considerations. But the results are clear: the British (83 percent) and French (86.8 percent) don't want more nuclear tests. Only North Korea has tested nuclear weapons during this century. Long gone are the days of the 1,030 U.S., 210 French, and 45 British tests, and the public doesn't seem eager to revisit them.

Belgium, Germany, Italy, and the Netherlands are all hosts—alongside Turkey—of U.S. B61 tactical nuclear gravity bomb deployments in Europe. Yet, these NATO allies have long been skeptical of the presence of the weapons. Earlier this year, a slim majority of the Belgian Senate voted to maintain the B61 deployments. Our data indicate that all four countries' publics oppose nuclear tests at nearly equal rates. Italians (89.6 percent) are the strongest critics, followed closely by the Belgians (88.6 percent), Dutch (87.7 percent), and Germans (84.2 percent).

Lastly, we surveyed two NATO states with relatively conservative populations: Poland and Turkey. Right-wing Polish President Andrezej Duda supported the Trump administration's withdrawal last year from the Intermediate-Range Nuclear Forces Treaty. And despite some possible recent setbacks, the Polish government has proposed building a military installation called "Fort Trump" to host U.S. troops. Regardless, 86.1 percent of Poles don't approve of the idea of a nuclear test. Turkey is a little more complicated because its relations with Washington have soured in recent years, but the country continues to host U.S. B61s. Populist President Recep Tayyip Erdoğan has also made statements suggesting that Ankara should be allowed to acquire nuclear weapons. Although it isn't clear whether respondents were thinking about potential U.S. or Turkish nuclear activities, 83.5 percent of Turks oppose a test in principle.

Test and Support Testing at Your Own Political Peril

Our survey results provide another piece of the puzzle toward understanding the consequences of a hypothetical U.S. nuclear test. Many analysts have laid out persuasive geopolitical and public health rationales for maintaining the twenty-eight-year U.S. moratorium on nuclear explosive testing. But even if government officials in the United States and its allied partners aren't convinced by these reasons not to test, public preferences are unmistakably clear. A U.S. nuclear test would be deeply unpopular in the United States and across its alliances in Europe and Asia. The potential electoral risks for authorizing or supporting a nuclear test are real for Trump, U.S. congressional candidates, and politicians around the world. Public revulsion to testing will also surely contribute to the continued decline of U.S. soft power and fraying of longstanding security alliances. Politicians would be wise to take note.