Views on the Economy and the World

A blog by Jeffrey Frankel

All Views on the Economy and the World posts

How Negotiators at Durban Can Agree on Emissions Targets

The parties to the UN Framework Convention on Climate Change are meeting once again in Durban, South Africa, from November 28 to December 9. The period covered by the Kyoto Protocol ends in 2012 and the clock is running out on negotiations for a successor agreement. Progress at Copenhagen two years ago and Cancun one year ago was slow. Negotiations have been blocked by a seemingly insurmountable obstacle. The United States is at loggerheads with the developing world, especially China–now the world’s largest emitter of greenhouse gases (GHG)–and India.

Fortunately, there might be a way to break through this roadblock. A formulas-based approach, building on existing commitments, could attain desired mitigation of concentrations of Greenhouse Gases, while yet avoiding the imposition of disproportionate economic costs on any single country or group of countries. The political feasibility of our proposal has been borne out over the last year, in that the specifics have turned out to be consistent with positions recently taken by the important players. This despite what appears to be a Gordian knot too big to be untied.

On the one hand, the leaders of India and China are clear: They won’t cut emissions until after the United States and other developed countries have cut theirs first. After all, the industrialized countries created the problem of global climate change, and got rich in the process. Developing countries shouldn’t be denied their turn at economic development, they argue. As the Indians point out, Americans emit more than 10 times as much carbon dioxide per person as they do.

On the other hand, the U.S. Congress is equally clear: It will not impose quantitative limits on U.S. GHG emissions if it fears that emissions from China, India, and other developing countries will continue to grow unabated. Indeed, that is why the Senate was unwilling to ratify the Kyoto Protocol ten years ago. Why should U.S. firms bear the economic cost of cutting emissions if energy-intensive domestic aluminum smelters and steel mills, for example, would just migrate to countries that have no caps and cheaper energy (a problem known as leakage)? Global emissions would simply continue their rapid rise in a different part of the world. Emission cap legislation will not pass the Senate as long as major developing countries haven’t accepted quantitative targets of their own.

Global issues of leakage and competitiveness can only be effectively addressed at the multilateral level. The climate change negotiators need to coalesce on a specific mechanism for setting the actual numbers for future emission targets. The framework must address the three gaping holes in the Kyoto Protocol: the absence of a mechanism for setting targets in the long run, the lack of participation by many major emitting countries, and the lack of faith that signatories will fulfill their commitments.

I see one practical solution to the apparently irreconcilable differences between the United States and the developing countries regarding binding quantitative targets: Washington would agree to join Europe in adopting emission targets that would cut substantially over the next 40 years. Simultaneously, in the same agreement, China, India, and other developing countries would agree to a path that immediately imposes binding emission targets on them. These would be targets that in the first five-year period simply follow the so-called business-as-usual path, defined as the rate of increase in emissions that these countries would experience in the absence of an international agreement, as determined by experts’ projections.

The idea of developing countries committing only to business-as-usual targets will be met with loud objections from both environmentalists and U.S. business interests because it doesn’t obligate China or other developing countries to cut emissions. But this commitment is far more important than it may sound at first. Specifically, it precludes carbon leakage from undermining the environmental goal of the agreement. The developing countries can’t go above their set business-as-usual paths as they would in the absence of this commitment and, therefore, can’t exploit developed states’ emissions reduction efforts by expanding carbon-intensive industries. This step mitigates the competitiveness concerns of carbon-intensive industries in developed countries.

Such an approach recognizes the reality that it would be irrational for China to agree to substantial cuts in the short term. Indeed, the developing countries, for their part, may object when asked to take on any kind of binding targets at all, at this stage. But they should realize that they would gain in strictly economic terms from such an agreement. The commitment, in an international system of emission permits trading, would give China the ability to sell permits at the world market price. How do we know Beijing would come out ahead? It is currently building roughly 100 power plants per year to accommodate its rapidly growing energy demand. The cost of shutting down an already-functioning U.S. coal-fired power plant is far higher than the cost of building a new low-carbon plant in China. For this reason, when a U.S. firm pays China to cut its emissions voluntarily, thereby obtaining a permit that the U.S. firm can use to meet its emission obligations, both parties benefit, even in strictly economic terms. The environmental benefit is that China’s aggregate emissions would voluntarily fall below its business-as-usual commitment from the beginning.

Of course, the next step to this solution requires that China and other developing countries make cuts below their business-as-usual path in future years and, eventually, make cuts in absolute terms as states gain confidence in the framework. But the developing countries must agree to the principle of making cuts similar to those made by Europe, the United States, and others who have gone before them, taking due account of differences in income. Emission targets can be determined by formulas that follow from four important guidelines:

(1) They give lower-income countries more time before they start to cut emissions.

(2) They ask richer countries for steeper cuts than poorer countries. This is a principle that turns out to have been embodied in the targets accepted by countries last year at Cancun. (See Figure 1, where the relationship between agreed emission cuts and income per capita is highly significant statistically.)

(3) They lead to a gradual convergence of emissions per capita over the course of the century.

(4) They take care not to reward any country for joining the system late. 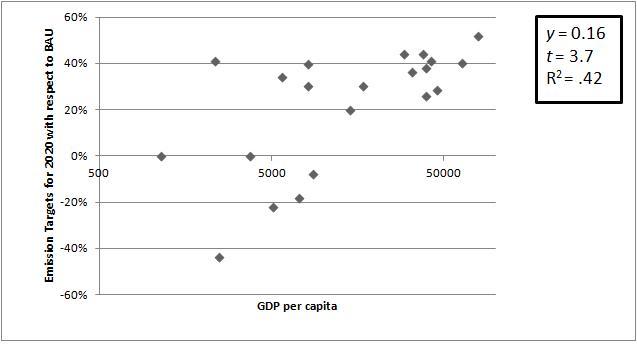 An application of FEEM’s WITCH model reveals that these formulas produce emission targets that obey common-sense constraints: no country or group of countries is asked to adopt targets that would cost it more than 1% of GDP over the century as a whole or more than 5% of GDP in any single five-year time period.

Realistically, no country (rich or poor) will abide by targets in any given period that entail extremely large economic sacrifices relative to the alternative of simply not participating in the system. It is time to stop making sweeping proposals that assume otherwise, and to pursue instead the narrow thread of the politically possible.

[The specifics of the formula's proposal are explained in "Sustainable Cooperation in Global Climate Policy: Specific Formulas and Emission Targets to Build on Copenhagen and Cancun," a background paper co-authored with Valentina Bosetti, for the annual Human Development Report just released by the UN Development Programme, Nov. 2011. All estimates were updated in light of recent developments, relative to our earlier paper, "Politically Feasible Emission Target Formulas to Attain 460 ppm CO2 Concentrations," forthcoming, Review of Environmental Economics and Policy (Oxford University Press) Winter 2012.]

This column appears at Vox. Comments may be posted there..
For more information on this publication: Belfer Communications Office
For Academic Citation: Frankel, Jeffrey.“How Negotiators at Durban Can Agree on Emissions Targets.” Views on the Economy and the World, November 28, 2011, https://www.belfercenter.org/publication/how-negotiators-durban-can-agree-emissions-targets.