Macron Should Carry the Flag for Europe's Values to China

French president must look beyond his country's own business interests

French President Emmanuel Macron will be the guest of honor when Xi Jinping opens the second annual China International Import Expo in Shanghai on Tuesday.

But Macron's second official visit to the country should be about more than feeding the growing appetite for consumption by the Chinese. Rather, Macron ought to use his meetings with his Chinese counterpart and other top officials to boldly advance a broader European agenda on issues ranging from climate change to intellectual property and even to human rights.

Over the last two years, many in Europe have begun to view Chinese intentions with suspicion.

In March, an EU statement described China bluntly as an economic competitor and a systemic rival as well as a "cooperation partner." It urged bloc officials to take "a flexible and pragmatic whole-of-EU approach enabling a principled defense of interests and values."

The following month, the bloc launched a new investment screening framework specifically aimed at protecting European control over sensitive technologies and infrastructure from Chinese encroachment. Along the same lines, the EU and its member states have been debating to what degree, if any, Chinese telecommunication equipment manufacturers Huawei Technologies and ZTE should be allowed to bid for supply contracts for fifth-generation, or 5G, network construction.

Quite tellingly, official Chinese reports ahead of Macron's trip have hardly mentioned Europe. For a French president who symbolically joined with German Chancellor Angela Merkel and European Commission President Jean-Claude Juncker to host Chinese President Xi this past March, this seems slightly awkward.

Will Macron be able to strike a fine balance during his time in Shanghai and Beijing between French and European interests?

Many smaller European countries whose leaders, seeking to please the Chinese leadership and attract more investment, have signed onto China's Belt and Road Initiative or attended the BRI summit in Beijing last May, may have doubts. 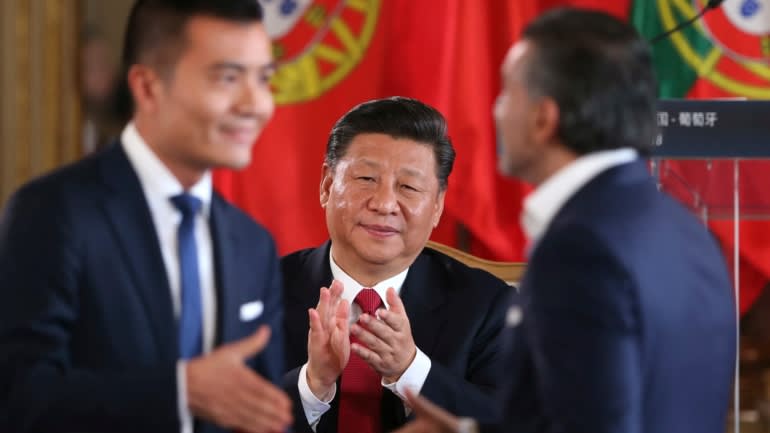 Xi Jinping applauds during the signing of agreements between Portugal and China in December 2018: many smaller European countries have signed onto the Belt and Road Initiative.   © AP

Much has changed since Macron's first visit to Beijing in January 2018, with Brussels increasingly posed in relation to China as the "bad cop" while national leaders like Merkel and her Italian counterparts have returned to their roles of promoting domestic business interests when visiting China.

Macron, too, will undoubtedly focus on promoting French business interests. He will be accompanied by a delegation of chief executives from the food, pharmaceutical, banking and aviation sectors keen for deals.

But as the EU's most high-profile head of state now, Macron must defend a European line. He should build on the earlier Paris meeting with Xi, Merkel and Juncker to put himself forward as leader of a unified, stronger Europe able to better face up to China economically and diplomatically.

Macron needs to engage his Chinese counterparts on global issues such as climate change, trade and intellectual property. He is keen on reaching "carbon neutrality" in economic output and wants China to play a leading role ahead of the treaty conference on biodiversity to be held next year in the Chinese city of Kunming.

Beijing has avowed interest in reinvigorating multilateral frameworks for tackling trade and intellectual property issues, which Macron should test them on. It is high time that China, in line with World Trade Organization principles, allows European companies to bid for government procurement contracts, reduces red tape and stops demanding that foreign companies transfer their technologies.

Macron should hold himself out as the EU standard-bearer for values and principled relations. This could be his chance to address France's disappointing public silence about Hong Kong, Xinjiang and China's human rights situation in general. While Paris has so far been equivocal on the BRI, Macron can push for a better balance between China's project and the EU's own "Connectivity" strategy toward Asia.

With Brexit looming, France already stands out as the sole EU nation with both a military presence and national territories in the Pacific -- and looks to soon be the bloc's only permanent representative on the UN Security Council.

This gives Paris a special position in relation to Beijing, enhanced by its history as one of the first Western European countries to establish formal diplomatic relations with the People's Republic of China. Few of France's peers have had a comparably long and relatively trusting relationship and record of sustained intellectual and academic exchanges with China.

With Beijing openly looking for European friends in the face of the hawkish and unilateralist Trump administration in Washington, Macron should insist on reciprocity in the Chinese market for European companies and call for China to bear a higher share of international responsibilities.

Europe is slowly awakening to the new world order where China is one of the world's top powers. With refreshed European institutions in place, including a new European Commission lineup and a European Parliament renewed by elections in May, Macron should use his visit to stand not just for Paris, but also for Brussels, in taking on China's increasingly authoritarian regime.

– Via the original publication source.
For more information on this publication: Belfer Communications Office
For Academic Citation: Le Corre, Philippe.“Macron Should Carry the Flag for Europe's Values to China.” Nikkei Asian Review, November 5, 2019.

The Future of the State Department

“We think major change is needed,” Nicholas Burns said about a new report suggesting reforms at the State Department.
Read the Report

At War and at Home: The Consequences of US Women Combat Casualties

Policies challenging conceptions of gender and war can alter perceptions of women’s competence in a traditionally masculine realm.
More on International Security