In this handout from the Department of Defense, Soviet ships are shown inbound to Cuba, carrying jet light bombers in crates, Oct. 23, 1962.

The Belfer Center’s Project on Managing the Atom, Intelligence Project, and Applied History Project organized a day-long conference in October to mark the 60th anniversary of the Cuban Missile Crisis and to discuss what we’ve learned from the CMC. Below, Managing the Atom’s Mariana Budjeryn discusses the relevance of those lessons for today’s conflict in Ukraine.

Video highlights from the conference are available here.

“Any fool can start a war.”– Nikita Khrushchev

“Above all, while defending our own vital interests, nuclear powers must avert those confrontations which bring an adversary to a choice of either a humiliating retreat or a nuclear war.” – John F. Kennedy 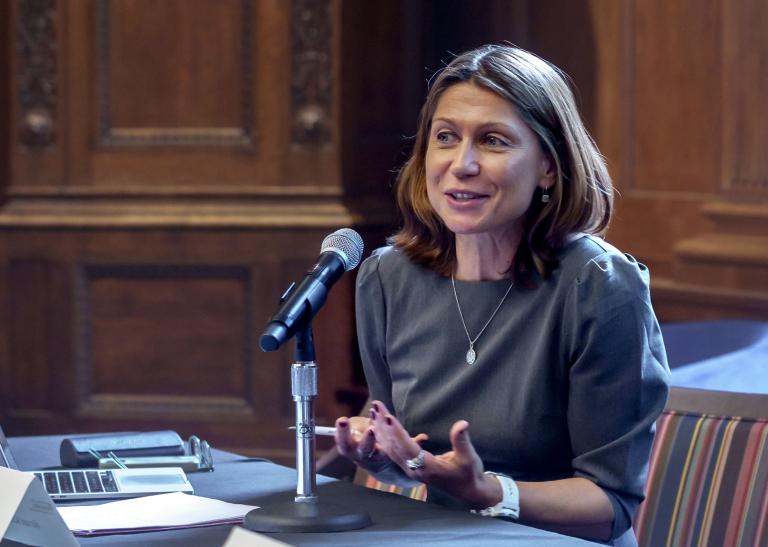 Mariana Budjeryn at the "Cuban Missile Crisis at 60: Lessons of the Past and Relevance for the Present" Conference in October.

The Cuban Missile Crisis is a never-ending story. As it unfolded 60 years ago, its gravity and perils were not lost on the people who lived through it. Nor was it lost on the leaders who maneuvered in the fog of this crisis, with much foresight and even more luck, toward a peaceful resolution, avoiding war and nuclear conflagration. After the Soviet Union collapsed, archives opened and participants came forward to share recollections. More terrifying details emerged, on both the Soviet and the US side, revealing just how close the world had come to a nuclear war in October 1962.

Today, as the fiercest conventional war in Europe since WWII rages on in Ukraine, prosecuted under the thick shadow of Russian nuclear threats, the Cuban Missile Crisis is mined anew for lessons in resolve and restraint, and most importantly, in preventing a nuclear war. On October 14, 2022, Harvard Kennedy School Belfer Center’s Project on Managing the Atom, Applied History Project, and Intelligence Project brought together preeminent historians and political scientists, as well as direct participants of the events, for a one-day conference to critically re-examine the lessons of the Cuban Missile Crisis and its relevance for the present day.

“The war in Ukraine will likely become just as much of a watershed moment as the Cuban Missile Crisis.”

Not surprisingly, there is no straight line between the Cuban Missile Crisis and the war in Ukraine. Complex historical events are highly contingent on contemporaneous geopolitical contexts, political forces and stakes, individual leaders, and technology. Upon nuanced examination, differences outweigh similarities. And yet the Cuban Missile Crisis offers important insights that resonate today: grave consequences of personalist political decisions based on flawed intelligence, potential for misunderstandings and dangerous accidents amid a crisis, the value of good leadership and prudent judgment, importance of communication channels, and the escalatory risks of any direct military conflagration between two nuclear-armed powers.

The richness of new scholarship on the Cuban Missile Crisis, revealing its complexities and nuances, can only be juxtaposed with the dearth of information available to any given person involved in the crisis at the time, with some of those people, including field commanders, having the capacity and authority to order a nuclear strike. Improved means of communication, rejection of pre-delegation of authority for nuclear use, and institution of negative controls on weapons systems raise barriers to nuclear escalation today. At the same time, all of the political and military leaders charged by history with managing the Cuban Missile Crisis vividly remembered the horrors of the Second World War. Some of them fought in it. No such leader is alive today, and the specter of war might not serve as a source of restraint.

The war in Ukraine will likely become just as much of a watershed moment as the Cuban Missile Crisis. While these two events are taking a very different course and might take different approaches to resolve, they both underscore the lingering peril of living with nuclear weapons. The Cuban Missile Crisis and the appreciation of nuclear dangers it brought helped invigorate negotiations of the nuclear Nonproliferation Treaty and a score of bilateral US-Soviet arms control treaties and risk reduction measures, including a hotline between Washington and Moscow. In the face of the war in Ukraine, do today’s leaders have the wisdom and foresight to leave a legacy of nuclear danger reduction?

Panelists who took part in the Cuban Missile Crisis conference in October published the following analysis and commentary:

Scott Sagan:  How to Keep the Ukraine Conflict From Going Nuclear