The 1994 Agreed Framework called for North Korea to dismantle its plutonium-production complex in exchange for civilian light water reactors (LWRs) and the promise of political normalization with the United States. Political and technical analysis reveals how the LWR project helped build credibility for the political changes promised in the Agreed Framework. 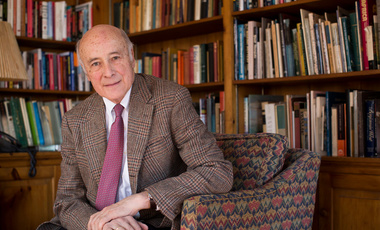 Joseph Nye's new book rates the efforts of presidents from FDR to Trump.

DoD/Department of the Air Force

SWJ interview with Nathaniel L. Moir, Ph.D., an Ernest May Postdoctoral Fellow in History and Policy at the Belfer Center for Science and International Affairs, Harvard Kennedy School. Dr. Moir is completing a book manuscript on Bernard Fall for publication.

In recent decades, the nuclear export market has observed a marked shift of demand from traditional customers in the Western world to Asia. The lack of projects in the United States, the delay in the French construction of advanced reactors, and the Fukushima accident in Japan have also led to the declining export capabilities of their companies. In contrast, Russia has gained numerous contracts, and China will likely become another major exporter. In this paper, the evolution of the market was examined from both the supply and demand sides with issues including the more concentrated and uncertain market, the lack of full participation by emerging suppliers to the nonproliferation regime, and the lesser governance capabilities of the newcomers. Addressing these issues, a range of policy suggestions was made, including the reinforcement of market shares of Western suppliers, the encouragement of newcomers to adhere to international norms, and a better safeguards contribution scheme.

Although South Korea adopted nuclear energy later than countries like the United States, Russia, or France, the country, until recently, has been considered to have one of the most successful civil nuclear power programs in the world, with a fully-devel- oped supply chain, a remarkable record in constructing and operating nuclear power plants (NPPs), and the ability to compete and win contracts to supply NPPs abroad. The fortune of South Korea’s nuclear program has seemingly come to an end, however, with the election of Moon Jae-in. The new South Korean President promised to reduce the country’s dependence on nuclear energy, and has, since taking office, implemented measures to phase out this type of electricity generation.

In this paper, following a brief history of the development of nuclear energy in South Korea, the root causes that instilled public distrust of nuclear energy and Moon Jae-in’s phase-out policy are discussed. Subsequently, by analyzing the validity of Moon’s plan, I argue that this phase-out policy is not beneficial for the long-term sustainability of South Korea’s economy in general, and of the Korean nuclear industry in particular. The paper concludes with policy recommendations for a more balanced nuclear policy that can accommodate public opinion and, at the same time, ensure energy security and provide other economic and diplomatic benefits.

The operation of the fleet of Chinese floating nuclear power plants in the South China Sea carries with it numerous safety and security risks that may have widespread consequences to not only China but also to Southeast Asia and beyond.

Back Channel Negotiations and Dangerous Waiting

The authors analyze the U.S.–North Korea nuclear standoff and the role of back channel negotiations and then develop a game theory framework for understanding why back channels can be beneficial.

Contrary to conventional wisdom, states with nuclear energy programs are not more likely than those without them to seek or acquire nuclear weapons.

How America and China Could Stumble to War

WAR BETWEEN the United States and China is not inevitable, writes Graham Allison, "but it is certainly possible. Indeed, as these scenarios illustrate, the underlying stress created by China’s disruptive rise creates conditions in which accidental, otherwise inconsequential events could trigger a large-scale conflict. That outcome is not preordained: out of the sixteen cases of Thucydides’s Trap over the last five hundred years, war was averted four times. But avoiding war will require statecraft as subtle as that of the British in dealing with a rising America a century ago, or the wise men that crafted a Cold War strategy to meet the Soviet Union’s surge without bombs or bullets. Whether Chinese and American leaders can rise to this challenge is an open question. What is certain is that the fate of the world rests upon the answer."