Ambassador Michael Froman, former U.S. Trade Representative is welcomed to the JFK Jr. Forum by the Institute of Politics, the Future of Diplomacy Project at the Belfer Center for Science and International Affairs, and the Mossavar-Rahmani Center for Business and Government. In an event co-chaired by Nicholas Burns and Lawrence H. Summers, Ambassador Froman will talk about American trade policy today. 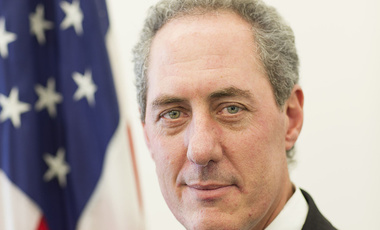 Ambassador Michael Froman is a Klein Fellow of Economic Diplomacy with the Future of Diplomacy Project and the Mossavar-Rahmani Center for Business and Government.

Froman is also a distinguished fellow at the Council on Foreign Relations and James R. Schlesinger distinguished professor at the University of Virginia's Miller Center of Public Affairs. He served in President Barack Obama’s cabinet as the U.S. trade representative from June 2013 to January 2017.  He worked to open foreign markets for U.S. goods and services, enforce America’s rights in the global trading system, and foster development through trade. Major initiatives under his leadership included the conclusion of the Trans-Pacific Partnership agreement in the Asia Pacific and negotiations toward a Transatlantic Trade and Investment Partnership with the European Union; among others.

Lawrence H. Summers is the Charles W. Eliot University Professor and President Emeritus at Harvard University. He served as the 71st Secretary of the Treasury for President Clinton and the Director of the National Economic Council for President Obama.