The transition to a low-carbon energy system will likely shake up the geopolitical status quo that has governed global energy systems for over a century. Policymakers need to rethink the role their country could play in a new energy world.

Renewable hydrogen is enjoying growing political and commercial momentum as a versatile and sustainable energy carrier with the potential to play a key role in the global transition to a low-carbon economy; and it is often described as the ‘missing link’ in global decarbonization—especially for energy intensive sectors where emissions are hard to abate and electrification is not the preferred solution, such as steel production, high-temperature industrial heat, shipping, aviation, and heat for buildings. But making renewable hydrogen a significant part of the world’s future energy mix will require defining new and innovative national and international policies while developing appropriate market structures aimed at spurring innovation along value chains; scaling technologies while significantly reducing costs; and deploying enabling infrastructure at scale. Success is possible, but this transformational effort will require close coordination between policy, technology, capital, and society to avoid falling into the traps and inefficiencies of the past.

Renewable hydrogen can be used for both mobility and stationary applications. As a sustainable mobility energy carrier, it can power fuel-cell electric vehicles or be the base for synthetic fuels. In stationary applications, it can be used to store renewable energy, both at utility scale or off-grid, providing backup to intermittent renewable energy sources and serving as a carbon-free heating source.

From a geopolitical perspective, whether future renewable hydrogen energy systems will be as concentrated as today’s oil and gas supply or decentralized like renewables is strongly related to future market structures, technology, and enabling infrastructure availability.

Our research shows that countries will likely assume specific roles in future renewable hydrogen systems and can be aggregated in five groups.

A detailed country classification is depicted below. 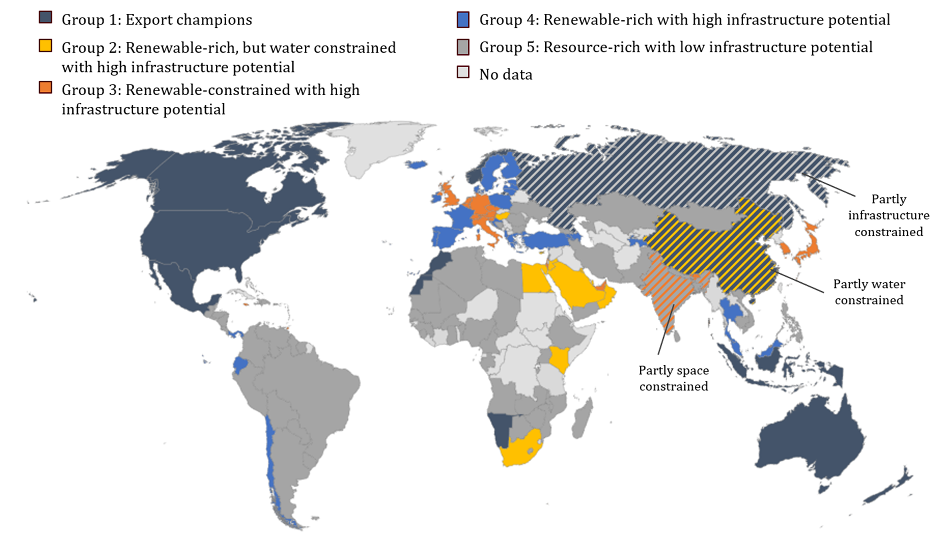 The results illustrate how a global transition to low-carbon technologies may not change the geopolitical position of importing countries, with their reliance on foreign fossil fuels being simply replaced by dependence on foreign renewable energy supplies. Future geopolitical realities of resource-poor countries in Europe and Southeast Asia might therefore be very similar to today’s with continuing energy import dependencies. At the same time, the Middle East is almost certain to play a less prominent role in future renewable hydrogen markets than in today’s oil markets. As a result, international political interest in the region could dwindle and shift to regions like North Africa.

From a policy perspective, “export champions” should define policies to trigger innovation and infrastructure investments thus paving the way for a dominant positioning in future markets. However, sustaining high renewable deployment rates will be key to achieve the needed scale. On the other hand, importing countries would benefit from enhanced cooperation with exporting nations to establish international standards for renewable hydrogen. In order to increase their energy security, governments of importing countries will also need to define long-term hydrogen strategies, including options to diversify supply. The potential impact of interruptions in hydrogen supply depends on how global the market will develop. If liquefaction and shipping over thousands of kilometers became cost-competitive, interruptions of supply in one part of the world could have impact on global prices. However, we believe that hydrogen, similar to natural gas, will initially flourish as regional markets.

Policymakers, investors, and other stakeholders need to assess the economic, environmental, and geopolitical implications of renewable hydrogen and examine possible courses of action. A deeper understanding of these nascent dynamics is needed, so that policy makers and investors can better navigate the challenges and opportunities of a low-carbon economy.

This policy brief is based on the report: ‘Geopolitical and Market Implications of Renewable Hydrogen: New Dependencies in a Low-Carbon Energy World’ published by Harvard Kennedy School’s Belfer Center for Science and International Affairs in March 2020.

For more information on this publication: Belfer Communications Office
For Academic Citation: De Blasio, Nicola and Fridolin Pflugmann. “The Geopolitics of Renewable Hydrogen.” Policy Brief, May 2021.