Interviewing all former U.S. Secretaries of State to examine—with Harvard faculty, students and experts—the most consequential negotiations they conducted while serving in the nation’s highest foreign policy office.

Formally launched in 2014, the American Secretaries of State Project is a joint initiative of the Future of Diplomacy Project at Harvard Kennedy School, the Program on Negotiation at Harvard Law School, and Harvard Business School. The Project is co-directed by Professor Nicholas Burns of Harvard Kennedy School, Professor James Sebenius of Harvard Business School, and Professor Robert Mnookin of Harvard Law School. The Research Director is Dr. Torrey Taussig. Alex Green serves as Senior Research Associate. 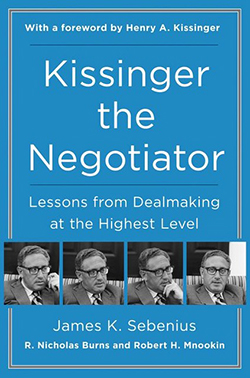 Building from the project’s extensive interviews and with the support of a research team, Professors Burns, Sebenius, and Mnookin will develop teaching cases, video teaching tools, documentary films, and two books on diplomacy, negotiation, and leadership.

The first book, Kissinger the Negotiator: Lessons from Dealmaking at the Highest Level, was released in May 2018. Henry Kissinger’s geopolitical insights, controversial policies, and individual negotiations have been extensively analyzed. Yet perhaps surprisingly, no serious cross-cutting study of Kissinger’s overall approach has extracted its lessons for current diplomatic and business negotiations.

This book neither aims to judge Kissinger nor to set the historical record straight. Rather, by exploring a career of extraordinary effectiveness, it seeks to learn as much as possible, obtaining useful insights into the art and science of negotiation from Kissinger’s dealmaking at the highest level.

The second book (currently under development) aims to synthesize insights of the Secretaries of State in their own words on diplomacy, negotiation and leadership. Written for a non-specialist audience, the book will illustrate the arc of U.S. diplomacy over the last half-century, drawing on the project’s extensive research and interviews with the former Secretaries of State. It will also offer prescriptive guidance on how effective diplomacy can help rebuild U.S. influence and leadership in the years ahead.

These outputs will make a unique and substantial contribution to the teaching of negotiation and diplomacy across Harvard University and beyond, while serving as a resource for future generations of scholars and practitioners in international affairs. An archive of associated research materials will be available to scholars studying related disciplines of conflict prevention and resolution, mediation, negotiation, and diplomacy.

In addition to the research material, teaching tools, and academic resources being generated from the interviews with the former Secretaries, this cross-university program inspired a first-of-its-kind interdisciplinary course, “Negotiation and Diplomacy,” co-taught by Professors Burns, Sebenius, and Mnookin. The course explores how diplomacy and negotiation can effectively address seemingly intractable international conflicts and overcome barriers to agreement in civil wars, interstate conflicts, as well as in trade and finance.

In the fall of 2020, Professors Mnookin and Sebenius taught the inaugural seminar, “Negotiation Lessons from American Secretaries of State,” at Harvard Law School. Using the project’s original transcripts and videos of personal interviews with the Secretaries, the seminar focused on each Secretary’s most important negotiations; leadership of the State Department; management of key relationships within the U.S. government; and development and execution of strategy to achieve U.S. foreign policy goals.