After the Revolution: Rethinking Economic Growth in the Middle East 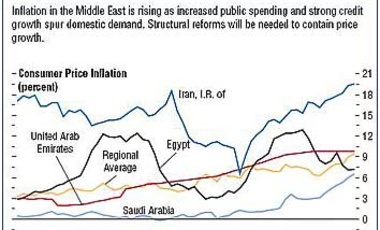 A panel discussion with Jalloul Ayed, Jihad Az'our and Samir Huliheh, moderated by HKS Professor Ishac Diwan. Co-sponsored by the Center for International Development. Lunch will be provided.

Mr. Ayed chaired the Management Committee of the BMCE Group during the last 10 years, as well as the boards of several fully owned subsidiaries of BMCE Bank Group and FinanceCom. He also founded Argan Invest, the largest private equity platform in Morocco. Mr. Jaloul Ayed held several other senior positions in the FinanceCom Group including, but not limited to Vice-Chairman of the supervisory Board of RMA Watanya, the largest insurance company in Morocco, Director of Bank of Africa and Chairman of the Board of Axis Capital, Tunis. He was also a Director at Proparco, the French development agency, and Vice Chairman and co-founder of Euromed Capital Forum.

Prior to BMCE, Mr. Ayed joined Citibank in 1980 where he spent 18 years. During his career with Citibank, he held various country management positions in the emerging countries of North Africa and the Middle East, and as Senior Banker with the Capital Markets Group at Citicorp International plc in London (1996-1998). During his various assignments at Citibank, Mr. Ayed formulated and implemented business strategies in the countries under his supervision, and made significant contributions to developing Citibank franchises in the MENA region.

Mr. Ayed obtained a Masters’ degree in Economics at the University of Maryland in 1979 where he was elected member of the Phi kappa Phi Honor Society. He is a renowned composer of classical music.

Prior to taking up this position, he was the Minister Finance of Lebanon for three years (2005 - 2008). Spearheaded the economic and financial program of the Lebanese Government, and coordinated the implementation of the various policies and reform initiatives. Led the preparation and the implementation of the Paris III International Donors Conference for Lebanon. Conducted a comprehensive modernization and reform agenda in the various departments of the Ministry of Finance. He also chaired the G8-BMENA Ministerial Group for 2006–2008, which regroups Ministers of Finance and Governors of central banks of the G8 and MENA countries.

He occupied senior positions in government, international organizations (project director of the UNDP/World Bank at the MoF), and the private sector (including McKinsey, Booz Allen Hamilton, Compagnie de Saint-Gobain). He also consulted for the IMF-FAD. He published several books and articles on economic and financial issues and has a long teaching experience at the American University of Beirut.

Jihad Azour obtained his PhD in International Finance from the Institut d'Etudes Politiques de Paris, in France. While completing his PhD, he served as post doctoral fellow at Harvard University's Department of Economics. Mr. Azour also holds a post-graduate degree (DEA) in International Finance and a Master's in Applied Economics from University Paris IX - Dauphine, France.

Samir Hulaileh, Chief Executive Officer of Palestine Development and Investment Ltd. (PADICO), has held various management positions in the public and private sectors. Prior to joining PADICO HOLDING in 2008 as CEO, he was the Managing Director of The Portland Trust in Palestine. He also served as the Cabinet Secretary General of the Palestinian government during 2005-2006 and the Assistant Undersecretary for the Ministry of Economy and Trade in 1994-1997.

Mr. Hulileh is an active member in many economic and academic establishments. He was the Chairman of the Palestine Trade Centre (PALTRADE) in 2004-2005 and a board member since 2002. Mr. Hulileh is also the Chairman of Palestine International Business Forum as well as a board member of the Palestine Economic Policy Research Institute (MAS), Palestinian Banking Corporation, Palestinian-British Business Council, Palestinian-Russian Business Council, and the International Chamber of Commerce ICC/Palestine. He is also a member of the Board of Trustees of the Friends Schools, Ramallah.

Currently, Mr. Hulileh represents PADICO HOLDING on the boards of various subsidiary and affiliate companies; he is the Chairman of Palestine Industrial Estate Development Company (PIEDCO Holding), and a board member of PALTEL Group, Palestine Exchange (PEX), Palestine Real Estate Investment Company (PRICO), and Palestine Mortgage and Housing Corporation (PMHC). Mr. Hulileh graduated from the American University of Beirut in 1983 with a Masters degree in Economics.

This panel will be moderated by Ishac Diwan, Lecturer in Public Policy, Harvard Kennedy School.