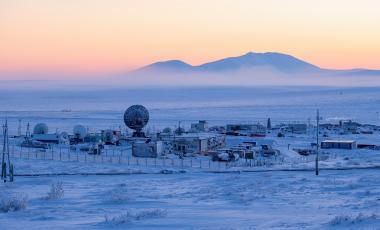 The Arctic has an infrastructure problem. Across much of the region, the basic assets that enable life in an integrated, globalized world—roads, ports, power grids, internet cables—are frequently inadequate, outdated, or nonexistent. As a result, Arctic communities often grapple with high costs and unreliable services, leaving them ill-prepared to address the realities of a warming climate and increased economic activity in the region.

Please join the next session of the Arctic Resilience Forum for a conversation discussing these questions and the need for resilient infrastructure in the Arctic.

Jack Durkee is the Program Associate for the Wilson Center's Polar Institute, and Manager of its Arctic Infrastructure Inventory. As Program Associate, he advises the director on the Institute's strategic growth and content development, and coordinates strategic partnerships; he also plays a leading role in the Greenland Dialogues. As Manager, he maintains the Inventory and is responsible for building a larger program on economic development.

He joined the Wilson Center in 2017 and previously was the Program Assistant of the Polar Institute, building the program from its inception; he also worked with both the CEO's Office and the Middle East Program during that time. His research interests include US Arctic policy, Arctic geopolitics, and international relations. He received his B.A. in Political Science from UC San Diego. He enjoys chess, finding new music, and travel in his free time.

Jennifer Spence is the Executive Secretary for the Arctic Council’s Sustainable Development Working Group. She holds a PhD in Public Policy with an interest in Arctic and international governance, institutional effectiveness and innovative policy processes. Jennifer is also an Adjunct Research Professor with Carleton University’s Northern Studies Program.  She lives in Ottawa, Canada with husband and two teenage daughters.

Mr. Olsen has been a speaker and panelist at  numerous international international conferences, universities and think tanks, in Europe, United States and Canada on issues pertaining to Greenland and Arctic issues as well as an contributing author to several books. He has been involved
in the negotiations and drafting of the chapter on foreign affairs in the Danish-Greenlandic Commission on Self-Government of 2008. He has also served as member of the the Danish Defense Commission of 2008 representing the Government of Greenland.

He has been posted at the Danish Foreign Ministry in Copenhagen and was at the Greenland Representation in Brussels from 2000 through 2003. He thereafter returned to Nuuk to be Head of Department at the Department of Foreign Affairs from 2003 - 2004. Mr. Holm Olsen earned a B.A. in Political Science from the University of Alaska Fairbanks in 1994 and a M.A. in International Affairs from The George Washington University in 1996.

Sam Schimmel is St. Lawrence Island Siberian Yupik and Kenaitze Indian from Alaska. Sam experienced first hand how Climate Change impacts Arctic communities. Sam was appointed by the Governor of Alaska to serve on the State of Alaska's Climate Action Leadership Team. He continues to support climate awareness and education as a representative for the National Congress of American Indians Climate Action Task Force.

Sam is an Advisory Board Member for the Center for Native American Youth and is on the Board of Directors for the Arctic Youth Network. Sam was a presenter at the 2020 Arctic Observing Summit. He is on the core planning team for the 2020 National Tribal Climate Change Summit.

As a 2020/2021 Arctic Youth Ambassador Sam, continues to learn, engage, and educate peers and communities about Arctic issues. Sam was awarded the 2020 Youth Environmental Excellence Award at this year's 2020 Tribal Environmental Leaders Summit. He is in his third year at Stanford University focusing on Earth Systems and Public Policy.

Taylor Drew Holshouser is a business development analyst at the Alaska Ocean Cluster and a researcher with the Wilson Center's Polar Institute. At the Wilson Center, he covers the socioeconomic and geopolitical implications of a warming Arctic and supports the development of the Institute’s Arctic Infrastructure Inventory.

In 2018, he received a B.A. in Humanities from Yale University, where he concentrated in the history of colonization and economic development in the American Arctic. As a lifelong Alaskan, he enjoys hiking, fly fishing, and packrafting.

This session highlighted a number of new resources:

ZERO ARCTIC: CONCEPTS FOR CARBON NEUTRAL ARCTIC CONSTRUCTION BASED ON TRADITION
The Zero Arctic project will develop regional concepts for Arctic building construction that would be carbon neutral over their full life cycle. The aim is to utilise both scientific life cycle assessment and energy simulation methods as well as to learn from and apply traditional knowledge of sustainable construction.