The October 21st Session is focused on Renewable Energy. Clean and secure energy is essential for resilient Arctic communities and intrinsically tied to issues such as health, climate, and food. The Icelandic Chairmanship of the Arctic Council therefore has made energy a priority and work is ongoing to promote the responsible and sustainable management, use, and development of energy – even in remote communities.

This session will highlight how energy is being transformative across the Arctic and consider questions such as: What does transition away from diesel look like? What tools are available to support transition? What is the role of policy and how are Indigenous communities leading the way? 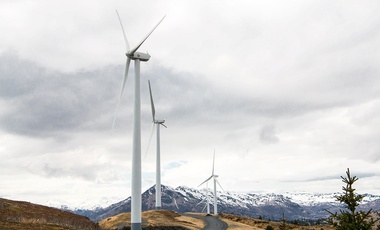 Indigenous and local communities, researchers, policy makers, and decision makers may approach energy through different lenses, but agree that clean and secure energy futures are essential for the resilience of Arctic communities. Governments make it a national priority, and it has implications across borders. At individual and community levels, energy needs and decisions are weighed against other priorities, equally important, and often as equally constrained.

Energy is one of the priorities of the Icelandic Chairmanship of the Arctic Council (2019-2021) and focus areas of the Council’s Sustainable Development Working Group (SDWG) and Arctic Contaminants Action Program (ACAP).  Work is ongoing to promote the responsible and sustainable management, use, and development of energy and resources, as well as innovative approaches encouraging renewable energy in even the most remote Arctic communities. Energy challenges and opportunities are present at every scale and intrinsically tied to other issues such as housing; economies; health and wellness; climate; food; and sovereignty.

Energy can be constraint to growth, or a means to achieve a greater vision. As our changing climate, increasing costs, and health necessitate a transition away from diesel dependence, what does that look like? What tools are available, and what enabling factors are necessary, to support that transition? What is the role of policy in advancing innovative energy projects and outcomes? And how are Indigenous communities, for whom the Arctic is their homelands, leading the way?

This session will consider those questions, and highlight how energy is being transformative across the Arctic.

11:45am ET    Demonstrating energy innovation in the Arctic
Presentations from four projects, followed by a discussion and Q&A with all attendees

Dana Tizya-Tramm, Chief, Vuntut Gwitchin First Nation
Chief Dana Tizya-Tramm was elected Chief of the Vuntut Gwitchin First Nation in November 2018 and provides leadership and direction for the Vuntut Gwitchin Government as well as overseeing executive, financial, operational, and general management. He brings years of experience in project management, strategic thinking, youth advocacy, organizational development, inspirational speaking, and governance. He has been co-chair of Gwich’in Council International, president of the Youth of the Peel Society, and project manager with Our Voices.

Vuntut Gwitchin First Nation declared a climate change state of emergency for lands, waters, animals and peoples in May 2019 and are on a path to carbon neutrality by 2030. As part of this, the award-winning Old Crow Solar Project will provide clean energy alternatives for Old Crow, reduce diesel dependence, and gain long-term energy security, revolutionizing community-designed and led projects and how Indigenous governments and power producers collaborate.

Yury Vasiliev, Executive Director, Institute of Arctic Technologies, Moscow Institute of Physics and Technology
Over the past 16 years, Yury Vasiliev is part of the senior management of large Russian companies, led the project of creation of technopark in sphere of high technologies of the Republic of Mordovia. In 2010 - 2014 he headed the Special Economic Zone (SEZ) in Zelenograd, initiated and spearheaded the creation of innovative territorial cluster «Zelenograd», one of the 13 winners of the Ministry of Economic Development competition. Since 2017, Yury Vasiliev participated in the creation and then headed the Institute of Arctic Technologies and the Scientific and Technological Center for Autonomous Energy in the MIPT.

Oskar Njaa, General Manager for International Affairs, The Bellona Foundation
Oskar is the head of the Russian Department in Oslo, and is responsible for project implementation and coordination of Bellona’s work across borders. Oskar has worked in Bellona since 2016 and has an MA from the University of Oslo in Russian area studies. Before he started in Bellona, he worked with the Norwegian environmental youth organization "Natur og Ungdom" as a coordinator for their Russia project, and has been a trainee with the Royal Norwegian Embassy in Moscow. During his studies, Oskar spent longer periods in Russia and he speaks Russian.

Berit Kristoffersen, Associate Professor, UiT The Arctic University of Norway, Arctic Centre for Sustainable Energy
Associate Professor Berit Kristoffersen’s expertise is in climate, energy, and oil politics in the Arctic and the Lofoten-Barents Sea area in particular. Her leadership position at the UiT on a number of interdisciplinary, multi-organization projects around the politics of Arctic infrastructure, energy, and environmental security is rooted in experience and access to local research networks at the Arctic Centre for Sustainable Energy (ARC) and beyond. At the ARC, Berit leads the research in the Smart Senja project, and the associated research project RENEW.

Learn more about the projects featured in this session and more energy projects led by the Arctic Council:

The Snowflake International Arctic Station (featured in session), a new Russian year-round research station will be fully powered by renewables:

Following up the Arctic Resilience Forum and due to increasing interests to the IAS “Snowflake”, an open online meeting with AHEAD leaders and partners will be held on November 2, 2020. Registration is required. https://us02web.zoom.us/webinar/register/WN_EcPPJlRvQpKFnL6dBGgSCg

During the conference Yury Vasiliev, Executive Director of the Institute of Arctic Technologies, Moscow Institute of Physics and Technology and head of the AHEAD project and Oskar Njaa – General Manager for International Affairs the Bellona Foundation will open detailed information about the project, construction plans, current results and some changes. As well as this, they will answer all questions related to the AHEAD project – International Arctic Station “Snowflake”.

Institute of Arctic Technologies and leaders of the Snowflake project invite international scientists and engineers to join the open collaboration.

The open online meeting on November 2, 2020 with potential and current partners will help to add some changes during the design and modeling stages, as well as to develop required infrastructure for implementation of new ideas and solutions.

Please send all your questions for the conference, suggestions and ideas for the Snowflake station to the arctic@phystech.edu.
More information: https://arctic-mipt.com

Smart Senja featured in session) is a large scale demo-project that kicked off in January 2020 and that is set to create a hybrid and smart energy system for coastal communities in Arctic Norway. In collaboration among local communities (including businesses and schools), the grid company Troms Kraft (project owner), Ishavskraft (power company), technology companies and UiT – the Arctic University of Norway, new energy solutions are co-created. Those solutions will form both the future energy system and provide local energy security: website https://smartsenja.no/ and video https://youtu.be/36JuvKuYXhw

Arctic Renewable Energy Atlas (AREA) is an online tool designed to enhance knowledge of the best practices and local adaptation actions on Arctic renewable energy and energy efficiency. The initial website, which was developed in Phase I (2015-2017), visualizes collected renewable energy supply and demand data. https://arcticrenewableenergy.org/

The Tundra Project, an initiative aimed at testing alternative clean and reliable energy solutions in a remote Arctic community in Murmansk region co-led by the United States and the Nordic Environment Finance Corporation (NEFCO) and endorsed by the Arctic Contaminants Action Program: https://vimeo.com/351159730