The November 25th session will focus on the topic of Socio-Ecological Resilience. Social-ecological resilience in the Arctic depends upon ecosystems - they are the life-support system that makes resilience in the North possible. As the Arctic transforms, ecosystems are changing, and Arctic livelihoods that depend on food, water and cultural practices linked to the land are threatened by those changes. This session will explore the ecosystems that are critical to life in the Arctic, and what we can do to strengthen them. 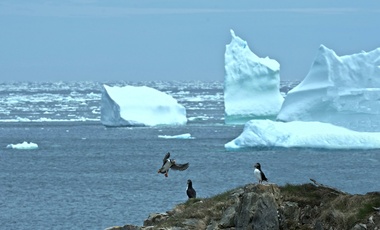 Photo By Alex Makarov via UnSplash

Social-ecological resilience in the Arctic depends upon ecosystems - they are the life-support system that makes resilience in the North possible. As the Arctic transforms, ecosystems are changing, and Arctic livelihoods that depend on food, water and cultural practices linked to the land are threatened by those changes. Arctic wetlands ecosystems, in particular, play a central role in these processes.

Human settlements have often been located near wetlands due to their contribution of fish, birds and animals as food sources, water storage and buffering capacity, and other benefits. Yet in some areas they were also feared, shrouded in mystery and the focus of myths of swamp creatures and places children should avoid. As the mists have lifted over the past half-century, we have learned more about wetlands’ value to people, and not least about the stunning amount of carbon that wetlands - and especially peatlands - hold in storage.

Arctic wetlands include vast expanses of peatlands, tundra and underlying permafrost and provide a range of benefits to people by supporting biodiversity and storing water and carbon. Unfortunately, they are also being damaged and degraded by human impacts that include land use, resource exploration and exploitation, and climate change.

This session describes the important role of wetlands ecosystems in supporting Arctic resilience. The session is organized around three important goals. The first is to highlight the important role of Arctic wetlands and their importance to Arctic peoples and to people at a global scale due to their enormous carbon storage and subsequent impact on climate change. A second goal is to demonstrate how a social-ecological systems perspective sheds light on actions needed to protect people via stewardship of nature. The third, pressing and practical goal of the session is to road test action/policy recommendations being jointly developed by the Conservation of Flora and Fauna Working Group and the Belmont Forum AWERRS project for the 2021 Arctic Council Ministerial.

Given the precarious status of Arctic wetlands social-ecological systems, this session seeks insights on three key questions: 1) What actions can be taken to accelerate and strengthen wetlands restoration efforts across the Arctic? 2) How can questions of responsible land-use to prevent future damage and degradation (including examples of stewardship and sustainable use) be more effectively addressed, and 3) what steps can be taken to support and strengthen community engagement and co-management approaches to Arctic wetlands stewardship, particularly indigenous co-management?

Marcus Carson
Marcus Carson is a Senior Research Fellow at the Stockholm Institute and Senior Advisor for the Swedish International Center for Local Democracy. He received his PhD in Sociology in 2004 from Stockholm University, where he also earned his Associate Professorship in 2009.  Carson’s background includes hands-on experience with community organizing, policy analysis, political and labor organization, and work as a teacher and researcher. Prior to moving to Sweden with his family, Marcus was involved for nearly 2 decades in social change and policy advocacy at the national, state and local level in the US., helping to win voter registration reforms, expansions in health care access and restrictions on the use of so-called lie detectors in employment. Over the past decade, Marcus has engaged on climate and other environmental and social changes most apparent in the Arctic, leading the second phase of the Arctic Resilience Report (2016) and a subsequent project on Arctic Wetlands under CAFF. He is now principal investigator for the Belmont Forum-funded project Arctic Wetlands Ecosystems – Resilience through Restoration and Stewardship. In this recent work, Marcus has become downright inspired by Arctic wetlands’ importance to people, for biodiversity, and the fact that they store a stunning amount of carbon.

Dr. Tatiana Minayeva
Tatiana Minayeva, PhD, studied biology at the Lomonosov Moscow State University, Moscow. Starting as a researcher, she continued working for nature conservation and sustainable land use planning in several institutions of the Russian Ministry of Nature Resources and Environment, among others involved in cooperation with CAFF. Tatiana further works in projects in the Arctic as part of the German consultancy Care for Ecosystems UG cooperating with the Centre for the conservation and restoration of wetland ecosystems IFS RAS (Moscow, Russia), Yugra State University (Khanty-Mansyjsk, Russia) and Wetlands International (The Netherlands).

Dr. Hlynur Oskarsson
Dr. Hlynur Oskarsson is a landscape ecologist at the Agricultural University of Iceland.  The focus of his research has mostly been on ecosystem biogeochemistry and the influence of land-use there on. In particular, he has conducted extensive research on the biogeochemistry of peatlands and the climatic effects of both peatland draining and rewetting.  Within the Agricultural University of Iceland Hlynur has served both as the Head of Research and as the Dean of the Faculty of Environmental Sciences.

Victoria Bushman
Victoria is an Iñupiaq (Inuk) conservation biologist from northern Alaska now living in Nuuk, Greenland. Her focus is broadly in the conservation of lands, waters, and species across Arctic Indigenous homelands, and she has worked across the Arctic in an effort to promote how Indigenous peoples fundamentally shape Arctic biodiversity conservation, from research, to management, to actualizing the dreams of new protected areas. Her role in research is to challenge the colonial legacy of conservation and instead promote partnerships with Indigenous communities, knowledge, and governance to develop ethically-conscious, culturally-relevant, and fully knowledge-based conservation efforts in the Arctic.

Dr. Stanislav Ksenofontov
Dr. Stanislav Ksenofontov is a human geographer and indigenous activist from the Sakha Republic (Yakutia) in Eastern Siberia. In his research Stanislav focuses on the vulnerability of Arctic social-ecological systems to global change drivers. Other research interests include sustainable communities, adaptation, socio-political transformations, megaprojects, Asian interests in the Arctic. He holds PhD in Human Geography from the University of Zurich, Switzerland. Currently he is a postdoctoral scholar at the ARCTICenter, University of Northern Iowa, USA