Are Democracies in Peril? 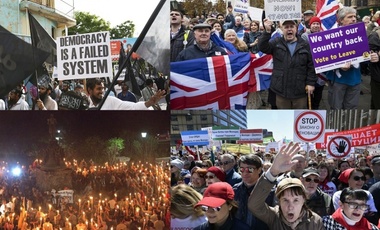 Meghan L. O'Sullivan is the Jeane Kirkpatrick Professor of the Practice of International Affairs and Director of the Geopolitics of Energy Project at Harvard University's Kennedy School. Her expertise includes the geopolitics of energy, decision making in foreign policy, nation-building, counterinsurgency, and the Middle East. Between 2004 and 2007, she was special assistant to President George W. Bush and Deputy National Security Advisor for Iraq and Afghanistan during the last two years of her tenure. She spent two years in Iraq, most recently in the fall of 2008 to help conclude the security agreement and strategic framework agreement between the United States and Iraq. Prior to this, Dr. O'Sullivan was senior director for strategic planning and southwest Asia in the NSC; political advisor to the Coalition Provisional Authority administrator and deputy director for governance in Baghdad; chief advisor to the presidential envoy to the Northern Ireland peace process; and a fellow at the Brookings Institution. Her publications include Shrewd Sanctions: Statecraft and State Sponsors of Terrorism (2003). Dr. O'Sullivan is an adjunct senior fellow at the Council on Foreign Relations, a consultant to the National Intelligence Council, and a strategic advisor to John Hess, the Chairman and CEO of Hess Corporation, an American independent oil and gas company. She is also a foreign affairs columnist for Bloomberg View, a director on the board of TechnoServe, a non-profit organization bringing business solutions to help alleviate poverty, as well as a member of the Advisory Committee to the Women's Initiative at the George W. Bush Institute. Meghan is a member of the Council of Foreign Relations, the Trilateral Commission, and the Aspen Strategy Group. She is also an advisor to Mitt Romney, a candidate for the Republican nomination for U.S. president. Dr. O'Sullivan has been awarded the Defense Department's highest honor for civilians, the Distinguished Public Service Medal, and three times been awarded the State Department's Superior Honor Award. In 2008, Esquire Magazine voted her one of the most influential people of the century. She holds a doctorate in Politics and a masters in Economics from Oxford University and a B.A. from Georgetown University.

Marshall Ganz grew up in Bakersfield, California, where his father was a Rabbi and his mother, a teacher. He entered Harvard College in the fall of 1960. He left a year before graduating to volunteer with the 1964 Mississippi Summer Project. He found a “calling” as an organizer for the Student Nonviolent Coordinating Committee, and, in the fall of 1965, joined Cesar Chavez in his effort to unionize California farm workers. During 16 years with the United Farm Workers he gained experience in union, political, and community organizing, became Director of Organizing, and was elected to the national executive board on which he served for 8 years. During the 1980s, he worked with grassroots groups to develop new organizing programs and designed innovative voter mobilization strategies for local, state, and national electoral campaigns. In 1991, in order to deepen his intellectual understanding of his work, he returned to Harvard College and, after a 28-year "leave of absence," completed his undergraduate degree in history and government. He was awarded an MPA by the Kennedy School in 1993 and completed his PhD in sociology in 2000. As senior lecturer in public policy at the Kennedy School of Government, he teaches, researches, and writes on leadership, organization, and strategy in social movements, civic associations, and politics. He has published in the American Journal of Sociology, American Political Science Review, American Prospect,Washington Post, Los Angeles Times and elsewhere. His newest book, Why David Sometimes Wins: leadership, organization and strategy in the California farm worker movement was published in 2009, earning the Michael J. Harrington Book Award of the American Political Science Association. He was awarded an honorary doctorate in divinity by the Episcopal Divinity School in 2010. Marshall Ganz also teaches "Leadership, Organizing and Action: Leading Change" an online program designed to help leaders of civic associations, advocacy groups and social movements learn how to organize communities that can mobilize power to make change.

Jane Mansbridge, Charles F. Adams Professor of Political Leadership and Democratic Values, is the author of Beyond Adversary Democracy, an empirical and normative study of face-to-face democracy, and the award-winning Why We Lost the ERA, a study of anti-deliberative dynamics in social movements based on organizing for an Equal Rights Amendment to the U.S. Constitution. She is also editor or coeditor of the volumes Beyond Self-Interest, Feminism,Oppositional Consciousness, Deliberative Systems, and Negotiating Agreement in Politics. She was President of the American Political Science Association in 2012-13.  Her current work includes studies of representation, democratic deliberation, everyday activism, and the public understanding of free-rider problems.

Khalil Gibran Muhammad is professor of History, Race and Public Policy at Harvard Kennedy School and the Suzanne Young Murray Professor at the Radcliffe Institute for Advanced Studies. He is the former Director of the Schomburg Center for Research in Black Culture, a division of the New York Public Library and the world’s leading library and archive of global black history. Before leading the Schomburg Center, Khalil was an associate professor at Indiana University. Khalil’s scholarship and teaching examines the broad intersections of race, democracy, inequality and criminal justice in modern U.S. History. He is a contributor to a 2014 National Research Council study, The Growth of Incarceration in the United States: Exploring Causes and Consequences, and is the author of The Condemnation of Blackness: Race, Crime, and the Making of Modern Urban America (Harvard), which won the 2011 John Hope Franklin Best Book award in American Studies. Much of his work has been featured in a number of national print and broadcast media outlets, including the New York Times, New Yorker, Washington Post, National Public Radio, Moyers and Company, MSNBC and C-Span. He has appeared in a number of feature-length documentaries, including Slavery by Another Name (2012) and the Oscar-nominated 13th (2016). Khalil was an associate editor of The Journal of American History and prior Andrew W. Mellon fellow at the Vera Institute of Justice. He holds two honorary doctorates and is on the boards of the Vera Institute of Justice, The Museum of Modern Art, The Barnes Foundation, The Nation magazine, and the advisory boards of Cure Violence and The HistoryMakers. A native of Chicago’s South Side, Khalil graduated from the University of Pennsylvania with a B.A. in Economics in 1993, and then joined Deloitte & Touche, LLP, as a staff accountant until entering graduate school. He earned his Ph.D. in U.S. History from Rutgers University.

Dani Rodrik is the Ford Foundation Professor of International Economy. He has published widely in the areas of economic development, international economics, and political economy. His current research focuses on populism, industrialization and structural change in developing economies, and interaction of ideas and interests in policy change. He is the recipient of the inaugural Albert O. Hirschman Prize of the Social Sciences Research Council and of the Leontief Award for Advancing the Frontiers of Economic Thought. His newest book is Straight Talk on Trade: Ideas for a Sane World Economy (2017, forthcoming). He is also the author of Economics Rules: The Rights and Wrongs of the Dismal Science (2015), The Globalization Paradox: Democracy and the Future of the World Economy (2011), and One Economics, Many Recipes: Globalization, Institutions, and Economic Growth (2007). He is currently President-Elect of the International Economic Association.

Kathryn Sikkink is the Ryan Family Professor of Human Rights Policy at HKS and the Carol K. Pforzheimer Professor at the Radcliffe Institute for Advanced Study.Sikkink works on international norms and institutions, transnational advocacy networks, the impact of human rights law and policies, and transitional justice.  Her publications include The Justice Cascade: How Human Rights Prosecutions are Changing World Politics (awarded the Robert F. Kennedy Center Book Award, and the WOLA/Duke University Award); Mixed Signals: U.S. Human Rights Policy and Latin America; Activists Beyond Borders: Advocacy Networks in International Politics (co-authored with Margaret Keck and awarded the Grawemeyer Award for Ideas for Improving World Order, and the ISA Chadwick Alger Award for Best Book in the area of International Organizations); and The Persistent Power of Human Rights: From Commitment to Compliance, (co-edited with Thomas Risse and Stephen Ropp).  She holds an MA and Ph.D. from Columbia University.  Sikkink has been a Fulbright Scholar in Argentina and a Guggenheim fellow. She is a member of the American Philosophical Society, the American Academy of Arts and Sciences and the Council on Foreign Relations, and a member of the editorial board of the International Studies Quarterly, International Organization, and the American Political Science Review.

Nicco Mele is the director of the Shorenstein Center on Media, Politics and Public Policy. He took over leadership of the Center in 2016 after serving as Senior Vice President and Deputy Publisher of the Los Angeles Times and as the Wallis Annenberg Chair in Journalism at the University of Southern California. He is the author of The End of Big: How The Internet Makes David the New Goliath and co-founder of EchoDitto (now Echo & Co.), a leading internet strategy and consulting firm. Mele also is a board member of the Nieman Foundation for Journalism at Harvard and a Senior Fellow at the USC Annenberg Center on Communication Leadership & Policy.