Ari Shavit: "My Promised Land: The Triumph and Tragedy of Israel"

A discussion with Ari Shavit, senior correspondent at Haaretz, about his recent book, My Promised Land: The Triumph and Tragedy of Israel. The book has garnered critical acclaim and won the Natan Book Award in 2013. This event will be moderated by Nicholas Burns, Professor of the Practice of Diplomacy and International Politics at Harvard Kennedy School. Jeffrey Goldberg, national correspondent, The Atlantic, will join the conversation. 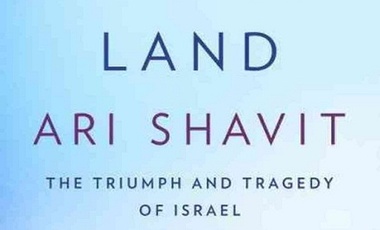 A discussion with Ari Shavit, senior correspondent at Haaretz, about his recent book, My Promised Land: The Triumph and Tragedy of Israel. The book has garnered critical acclaim and won the Natan Book Award in 2013.

This event will be moderated by Nicholas Burns, Professor of the Practice of Diplomacy and International Politics at Harvard Kennedy School. Jeffrey Goldberg, national correspondent, The Atlantic, will join the conversation.

Ari Shavit is a leading Israeli columnist and writer. Born in Rehovot, Israel, Shavit served as a paratrooper in the IDF and studied philosophy at the Hebrew University in Jersualem. In the 1980s he wrote for the progressive weekly Koteret Rashit, in the early 1990s he was chairperson of the Association for Civil Rights in Israel, and in 1995 he joined Haaretz, where he serves on the editorial board. Shavit is also a leading commentator on Israeli public television.

Jeffrey Goldberg is a national correspondent for The Atlantic and a recipient of the National Magazine Award for Reporting. Author of the book Prisoners: A Story of Friendship and Terror, Goldberg also writes the magazine's advice column.

His book Prisoners was hailed as one of the best books of 2006 by the Los Angeles Times, The New York Times, The Washington Post, Slate, The Progressive, Washingtonian magazine, and Playboy. Goldberg rthe recipient of the 2003 National Magazine Award for Reporting for his coverage of Islamic terrorism. He is also the winner of the International Consortium of Investigative Journalists prize for best international investigative journalist; the Overseas Press Club award for best human-rights reporting; and the Abraham Cahan Prize in Journalism. He is also the recipient of 2005's Anti-Defamation League Daniel Pearl Prize.

In 2001, Goldberg was appointed the Syrkin Fellow in Letters of the Jerusalem Foundation, and in 2002 he became a public-policy scholar at the Woodrow Wilson International Center for Scholars in Washington, D.C.

About My Promised Land:

Not since Thomas L. Friedman’s groundbreaking From Beirut to Jerusalem has a book captured the essence and the beating heart of the Middle East as keenly and dynamically as My Promised Land. Facing unprecedented internal and external pressures, Israel today is at a moment of existential crisis. Ari Shavit draws on interviews, historical documents, private diaries, and letters, as well as his own family’s story, illuminating the pivotal moments of the Zionist century to tell a riveting narrative that is larger than the sum of its parts: both personal and national, both deeply human and of profound historical dimension.

We meet Shavit’s great-grandfather, a British Zionist who in 1897 visited the Holy Land on a Thomas Cook tour and understood that it was the way of the future for his people; the idealist young farmer who bought land from his Arab neighbor in the 1920s to grow the Jaffa oranges that would create Palestine’s booming economy; the visionary youth group leader who, in the 1940s, transformed Masada from the neglected ruins of an extremist sect into a powerful symbol for Zionism; the Palestinian who as a young man in 1948 was driven with his family from his home during the expulsion from Lydda; the immigrant orphans of Europe’s Holocaust, who took on menial work and focused on raising their children to become the leaders of the new state; the pragmatic engineer who was instrumental in developing Israel’s nuclear program in the 1960s, in the only interview he ever gave; the zealous religious Zionists who started the settler movement in the 1970s; the dot-com entrepreneurs and young men and women behind Tel-Aviv’s booming club scene; and today’s architects of Israel’s foreign policy with Iran, whose nuclear threat looms ominously over the tiny country.

As it examines the complexities and contradictions of the Israeli condition, My Promised Land asks difficult but important questions: Why did Israel come to be? How did it come to be? Can Israel survive? Culminating with an analysis of the issues and threats that Israel is currently facing, My Promised Land uses the defining events of the past to shed new light on the present. The result is a landmark portrait of a small, vibrant country living on the edge, whose identity and presence play a crucial role in today’s global political landscape.