"The Battle for Pluralism" with Marwan Muasher

A seminar with Marwan Muasher, Vice President for Studies and Director of the Middle East Program at the Carnegie Endowment for International Peace. 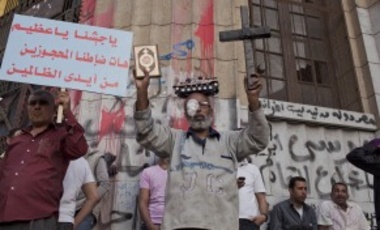 Getty Images
An Egyptian protester holds up a cross and a copy of the Koran during a demonstration at the Cairo High Court building against Egyptian President Mohammed Morsi in Cairo, Egypt.

A seminar with Marwan Muasher, Vice President for Studies and Director of the Middle East Program at the Carnegie Endowment for International Peace.

Almost four years into the Arab uprisings, much of the Arab world is struggling today. The process of change, with the exception of few countries like Tunisia, is stalled as the region confront challenges posed both by radical forces such as ISIS, and status quo forces resilient to change.  Does the region have any hopes of transitioning to stability, prosperity and democracy? What needs to happen for it to do so?

Marwan Muasher is vice president for studies at the Carnegie Endowment, where he oversees the Endowment’s research in Washington and Beirut on the Middle East. Muasher served as foreign minister (2002–2004) and deputy prime minister (2004–2005) of Jordan, and his career has spanned the areas of diplomacy, development, civil society, and communications. He was also a senior fellow at Yale University in 2010-2011.

Muasher began his career as a journalist for the Jordan Times. He then served at the Ministry of Planning, at the prime minister’s office as press adviser, and as director of the Jordan Information Bureau in Washington.

In 1996 he became minister of information and the government spokesperson. From 1997 to 2002, he served in Washington again as ambassador, negotiating the first free trade agreement between the United States and an Arab nation. He then returned to Jordan to serve as foreign minister, where he played a central role in developing the Arab Peace Initiative and the Middle East Road Map.

In 2004 he became deputy prime minister responsible for reform and government performance, and led the effort to produce a ten-year plan for political, economic, and social reform. From 2006 to 2007, he was at the Jordanian Senate.

Most recently, he was senior vice president of external affairs at the World Bank from 2007 to 2010.