Behind and Beyond the Gulf Crisis

A seminar with Lina Khatib, Head of the Middle East and North Africa Programme, Chatham House. 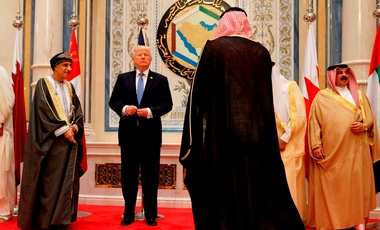 AP Photo/Evan Vucci
President Donald Trump adjusts his jacket before posing for photos with leaders at the Gulf Cooperation Council meeting, at the King Abdulaziz Conference Center, Sunday, May 21, 2017, in Riyadh.

This talk addresses the power dynamics behind the crisis in the Gulf that has seen a stand-off between Qatar and other Arab states. What has motivated this crisis and what are its implications for conflicts in the region?

Lina Khatib is the head of the Middle East and North Africa Programme at Chatham House. She was formerly director of the Carnegie Middle East Center in Beirut and the co-founding head of the Program on Arab Reform and Democracy at Stanford University’s Center on Democracy, Development, and the Rule of Law. Her research focuses on the international relations of the Middle East, Islamist groups and security, political transitions, and foreign policy, with special attention to the Syrian conflict.

She is a research associate at SOAS, was a senior research associate at the Arab Reform Initiative and lectured at Royal Holloway, University of London. She has published several books and also written widely on public diplomacy, political communication, and political participation in the Middle East. She is a frequent commentator on politics and security in the Middle East and North Africa at events around the world and in the media.