Belfer Policy Chats (BPC)  is an event series that features our fellows to chat about issues at the forefront of global policy. The aim is to provide a forum to engage on an informal level on policy topics at the Center around topics such as climate, national security, science and technology, cyber security, innovation, and competitiveness.  Join us for this virtual event. 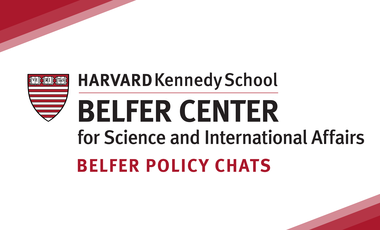 Over the past decade, China's emergence as a geopolitical leader in Asia has upended the region's U.S.-led economic and security status quo. As both the U.S. and China vie for influence over other Asia-Pacific states, both countries are locked in an international rivalry that threatens to erupt into conflict. Furthermore, their diverging economic and security priorities paint two distinctly different visions for the region with greater implications for the global stage.

Dr. Audrye Wong and Alex Yu-Ting Lin, International Security Program research fellows at the Belfer Center, will discuss their research on great power competition in the Asia-Pacific region, from whether China's Belt-and-Road Initiative translates into tangible, political outcomes, to why Chinese influence among the region's smallest states will define its likelihood for future conflict, to how COVID-19 will impact U.S.-China strategic competition. They will also share stories of their academic paths and answer your questions about pursuing international security research as a career.

Grace Headinger, Operations Coordinator at the Belfer Center, will moderate the discussion.

BPC Participants |
Audrye Wong is a Grand Strategy, Security, and Statecraft postdoctoral fellow at the Harvard Kennedy School and MIT’s Security Studies Program. From fall 2021, she will be an assistant professor of political science and international relations at the University of Southern California. Audrye’s research examines how states achieve geopolitical influence using non-military tools, with a focus on China's foreign policy and Asia-Pacific security issues. Her current book project examines the strategies and effectiveness of economic statecraft. Audrye received her Ph.D. in Security Studies from Princeton University's Woodrow Wilson School. She has also been affiliated with Harvard's Fairbank Center, the Brookings Institution, and the Carnegie Endowment for International Peace.

Alex Yu-Ting Lin is a Research Fellow with the International Security Program, Belfer Center for Science and International Affairs, Harvard Kennedy School and a Hans J. Morgenthau Fellow with the Notre Dame International Security Center. He is currently a Ph.D. Candidate at the University of Southern California. His book project examines how provocations from smaller states trigger and exacerbate the competition for status and prestige between the rising power and the established great powers. His other research examines Chinese economic statecraft and regional order in the Asia Pacific. Previously, he was a predoctoral fellow at the Institute for Security and Conflict Studies, the George Washington University.

Grace Headinger is the Operations Coordinator at the Belfer Center. She received her B.A. in International Affairs from George Washington University with a focus on economic, foreign, and security policy across the Indo-Pacific region. Previously, she has worked at the Australian Department of Foreign Affairs and Trade, the 2018 Pyeongchang Olympic Games, the U.S. House of Representatives, and the Asia Maritime Transparency Initiative within the Center for Strategic and International Studies.