Book Talk: Beyond the Arab Cold War: The International History of the Yemen Civil War, 1962-68

A seminar with Asher Orkaby, Research Fellow, Davis Center for Russian and Eurasian Studies, Harvard University and Lecturer, Tufts University, on his recent book, Beyond the Arab Cold War: The International History of the Yemen Civil War, 1962-68, from Oxford University Press. 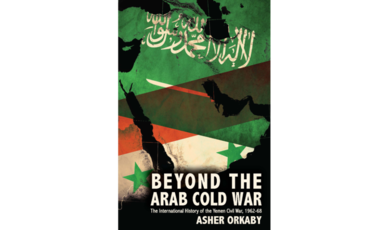 Oxford University Press
Beyond the Arab Cold War: The International History of the Yemen Civil War, 1962-68, by Asher Orkaby

A seminar with Asher Orkaby, Research Fellow, Davis Center for Russian and Eurasian Studies, Harvard University and Lecturer, Tufts University, on his recent book, Beyond the Arab Cold War: The International History of the Yemen Civil War, 1962-68, from Oxford University Press.

The current conflict in Yemen is not part of a bipolar regional rivalry between Iran and Saudi Arabia. Rather, it is the culmination of a local civil war that began in 1962 with the establishment of a modern republic and the overthrow of a 1,000 year ruling imamate. Houthi tribesmen and the remnants of the Yemeni republic are fighting for the very identity of the Yemeni state and its place in South Arabia.

Beyond the Arab Cold War brings the Yemen Civil War, 1962-68, to the forefront of modern Middle East History. During the 1960s, in the wake of a coup against Imam Muhammad al-Badr and the formation of the Yemen Arab Republic (YAR), Yemen was transformed into an arena of global conflict. Believing al-Badr to be dead, Egypt, the Soviet Union, and most countries recognized the YAR. But when al-Badr unexpectedly turned up alive, Saudi Arabia and Britain offered support to the deposed Imam, drawing Yemen into an internationally-sponsored civil war. Throughout six years of major conflict, Yemen sat at the crossroads of regional and international conflict as dozens of countries, international organizations, and individuals intervened in the local South Arabian civil war.

Yemen was a showcase for a new era of UN and Red Cross peacekeeping, clandestine activity, Egyptian counterinsurgency, and one of the first largescale uses of poison gas since WWI. Events in Yemen were not dominated by a single power, nor were they sole products of US-Soviet or Saudi-Egyptian Arab Cold War rivalry. Britain, Canada, Israel, the UN, the US, and the USSR joined Egypt and Saudi Arabia in assuming varying roles in fighting, mediating, and supplying the belligerent forces. Despite Cold War tensions, Americans and Soviets appeared on the same side of the Yemeni conflict and acted mutually to confine Egyptian President Gamal Abdel Nasser to the borders of South Arabia. The end of the Yemen Civil War marked the end of both Nasser's Arab Nationalist colonial expansion and the British Empire in the Middle East, two of the most dominant regional forces.

This internationalized conflict was a pivotal event in Middle East history, overseeing the formation of a modern Yemeni state, the fall of Egyptian and British regional influence, another Arab-Israeli war, Saudi dominance of the Arabian Peninsula, and shifting power alliances in the Middle East that continue to lie at the core of modern-day conflicts in South Arabia.

Asher Orkaby, PhD is currently a research fellow at the Harvard University Davis Center and a lecturer at Tufts University. He earned his PhD from Harvard University in International History and Middle Eastern Studies and is the author of Beyond the Arab Cold War: The International History of the Yemen Civil War, 1962-68, recently published by Oxford University Press. Over the course of the current conflict in Yemen, he has contributed regularly to Foreign Affairs, The National Interest, and other policy publications and has commented on both US and international media such as CSPAN, CGTN, Waqt News and Al-Hurra.