Examining 31 countries’ immigration demographic outcomes, this book derives a taxonomy of immigration regimes and develops explanations for what drives the variation in outcomes across borders. Its analysis finds that the world’s most prominent migration regimes appear far more influenced by the policies of the Gulf states than those of the settler states of yesteryear. A "Market Model" is emerging. 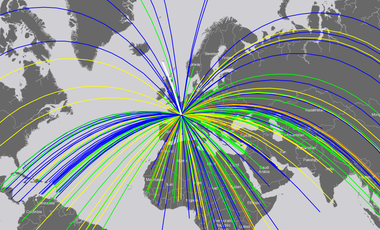 Justin Gest
From the Crossroads of Migration data map.

Research for Crossroads: Comparative Immigration Regimes in Times of Demographic Change was supported in part by the Middle East Initiative through the Kuwait Program at Harvard Kennedy School.

After the end of the Cold War, many argued that the world was converging towards an increasingly open, liberal, and non-discriminatory immigration system, even if countries retained distinctive models. However, during the same period, an alternative vision was emerging in the Gulf Arab States—one that saw the facilitation of global movement as an economic opportunity to be exploited, and a risk to the security of national identity and sovereignty. While these two approaches exemplify different extreme types of immigration governance and have been analyzed in a growing range of social science analysis, they have not yet been adequately understood in the context of a unified, systematic and comprehensive taxonomy of national immigration regimes. In response to this gap, this book examines 31 countries’ immigration demographic outcomes, derives a taxonomy of immigration regimes, and develops explanations for what drives the variation in outcomes across borders. Examining this taxonomy, we find that the world’s most prominent migration destination regimes in the current day appear far more influenced by the policies of the Gulf states than those of the settler states of the Cold War period. Indeed, countries are converging toward elevated numbers of temporary migrants, a focus on labor migration via economic visas or free movement agreements, forms of tacitly ethnicity-based selection through free movement agreements, and relatively low levels of naturalization. Relative to liberal expectations, this emerging approach embodies what we refer to as a “Market Model” that reflects the increasingly contingent nature of labor markets worldwide.

Justin Gest is an Assistant Professor of Public Policy at George Mason University’s Schar School of Policy and Government. His teaching and research interests include minority political behavior, immigration policy, and demographic change.

He is the author of Apart: Alienated and Engaged Muslims in the West (Oxford University Press 2010), The New Minority: White Working Class Politics in an Age of Immigration and Inequality (Oxford University Press 2016), and will soon publish Crossroads: Comparative Immigration Regimes in Times of Demographic Change (Cambridge University Press 2017). He is the editor of Silent Citizenship: The Politics of Marginality in Unequal Democracies (Routledge 2016), and has authored a dozen peer-reviewed articles. He has also provided commentaries for BBC, CNN, The Guardian, NPR, Politico, Reuters, and Vox.