Book Talk: Into the Hands of the Soldiers: Freedom and Chaos in Egypt and the Middle East

A seminar with David Kirkpatrick, New York Times International Correspondent and Cairo Bureau Chief, 2011-2015, on his recent book Into the Hands of the Soldiers: Freedom and Chaos in Egypt and the Middle East (Viking, 2018).

Followed by a book signing at the Harvard COOP, 1400 Mass Ave in Harvard Square.

Co-sponsored by the Shorenstein Center on Media, Politics, and Public Policy. 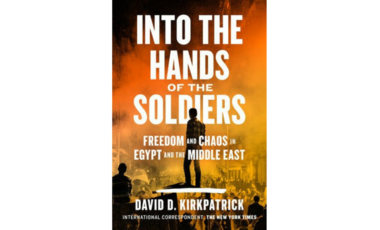 Viking
Into the Hands of the Soldiers cover

A seminar with David Kirkpatrick, New York Times International Correspondent and Cairo Bureau Chief, 2011-2015, on his recent book Into the Hands of the Soldiers: Freedom and Chaos in Egypt and the Middle East (Viking, 2018). Moderated by Tarek Masoud, MEI Faculty Chair and Sultan of Oman Professor of International Relations, HKS.

Followed by a book signing at the Harvard COOP, 1400 Mass Ave in Harvard Square.

Co-sponsored by the Shorenstein Center for on Media, Politics, and Public Policy.

About Into the Hands of the Soldiers

A candid narrative of how and why the Arab Spring sparked, then failed, and the truth about America’s role in that failure and the subsequent military coup that put Sisi in power–from the Middle East correspondent of the New York Times.

In 2011, Egyptians of all sects, ages, and social classes shook off millennia of autocracy, then elected a Muslim Brother as president. The 2013 military coup replaced him with a new strongman, Abdel Fattah el-Sisi, who has cracked down on any dissent or opposition with a degree of ferocity Mubarak never dared. New York Times correspondent David D. Kirkpatrick arrived in Egypt with his family less than six months before the uprising first broke out in 2011, looking for a change from life in Washington, D.C. As revolution and violence engulfed the country, he received an unexpected and immersive education in the Arab world.

For centuries, Egypt has set in motion every major trend in politics and culture across the Middle East, from independence and Arab nationalism to Islamic modernism, political Islam, and the jihadist thought that led to Al Qaeda and ISIS. The Arab Spring revolts of 2011 spread from Cairo, and now Americans understandably look with cynical exasperation at the disastrous Egyptian experiment with democracy. They fail to understand the dynamic of the uprising, the hidden story of its failure, and Washington’s part in that tragedy. In this candid narrative, Kirkpatrick lives through Cairo’s hopeful days and crushing disappointments alongside the diverse population of his new city: the liberal yuppies who first gathered in Tahrir Square; the persecuted Coptic Christians standing guard around Muslims at prayer during the protests; and the women of a grassroots feminism movement that tried to seize its moment. Juxtaposing his on-the-ground experience in Cairo with new reporting on the conflicts within the Obama administration, Kirkpatrick traces how authoritarianism was allowed to reclaim Egypt after thirty months of turmoil.

Into the Hands of the Soldiers is a heartbreaking story with a simple message: The failings of decades of autocracy are the reason for the chaos we see today across the Arab world. Because autocracy is the problem, more autocracy is unlikely to provide a durable solution. Egypt, home to one in four Arabs, is always a bellwether. Understanding its recent history is essential to understanding everything taking place across the region today–from the terrorist attacks in the North Sinai and Egypt’s new partnership with Israel to the bedlam in Syria and Libya.

Read a summary, reviews, and more on the book webpage.