A seminar with Curtis R. Ryan, Professor of Political Science at Appalachian State University, on his recent book, Jordan and the Arab Uprisings: Regime Survival and Politics Beyond the State (Columbia University Press, 2018). 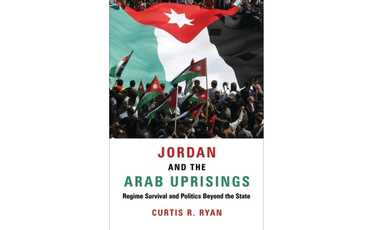 A seminar with Curtis R. Ryan, Professor of Political Science at Appalachian State University, on his recent book, Jordan and the Arab Uprisings: Regime Survival and Politics Beyond the State (Columbia University Press, 2018).

When the Arab Spring protests rocked the Arab world, toppling regimes and changing regional politics, many wondered if Jordan would be next. Since those initial protests, Jordan has seen an influx of almost a million refugees, a rise in terrorism at home and across its borders, a devastating economic crisis, and still more protests. This presentation examines Jordan’s challenges – for state and society, government and opposition – as the kingdom navigates from crisis to crisis.

Curtis R. Ryan is a Professor of Political Science at Appalachian State University in North Carolina, USA. He is the author of many articles and chapters on international relations in the Middle East, on inter-Arab relations and alliance politics, and on Jordanian domestic politics and foreign policy. He is the author of three books: Jordan in Transition: From Hussein to Abdullah (Lynne Rienner, 2002), Inter-Arab Alliances: Regime Security and Jordanian Foreign Policy (University Press of Florida, 2009), and most recently, Jordan and the Arab Uprisings (Columbia University Press, 2018).

About Jordan and the Arab Uprisings

From the Columbia University Press webpage:

"In 2011, as the Arab uprisings spread across the Middle East, Jordan remained more stable than any of its neighbors. Despite strife at its borders and an influx of refugees connected to the Syrian civil war and the rise of ISIS, as well as its own version of the Arab Spring with protests and popular mobilization demanding change, Jordan managed to avoid political upheaval. How did the regime survive in the face of the pressures unleashed by the Arab uprisings? What does its resilience tell us about the prospects for reform or revolutionary change?

In Jordan and the Arab Uprisings, Curtis R. Ryan explains how Jordan weathered the turmoil of the Arab Spring. Crossing divides between state and society, government and opposition, Ryan analyzes key features of Jordanian politics, including Islamist and leftist opposition parties, youth movements, and other forms of activism, as well as struggles over elections, reform, and identity. He details regime survival strategies, laying out how the monarchy has held out the possibility of reform while also seeking to coopt and contain its opponents. Ryan demonstrates how domestic politics were affected by both regional unrest and international support for the regime, and how regime survival and security concerns trumped hopes for greater change. While the Arab Spring may be over, Ryan shows that political activism in Jordan is not, and that struggles for reform and change will continue. Drawing on extensive fieldwork and interviews with a vast range of people, from grassroots activists to King Abdullah II, Jordan and the Arab Uprisings is a definitive analysis of Jordanian politics before, during, and beyond the Arab uprisings."