A seminar with Daniel Philpott, professor of Political Science at the University of Notre Dame, on his new book Religious Freedom in Islam: The Fate of a Universal Human Right in the Muslim World Today from Oxford University Press. This seminar is co-sponsored by the Alwaleed Islamic Studies Program at Harvard University. 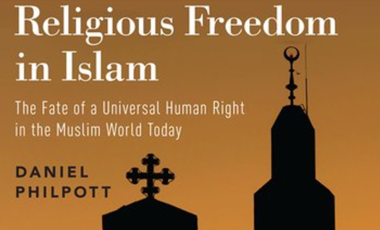 Oxford University Press
Religious Freedom in Islam: The Fate of a Universal Human Right in the Muslim World Today

A seminar with Daniel Philpott, professor of Political Science at the University of Notre Dame, on his new book Religious Freedom in Islam: The Fate of a Universal Human Right in the Muslim World Today from Oxford University Press. This seminar is co-sponsored by the Alwaleed Islamic Studies Program at Harvard University.

Since at least the attacks of September 11, 2001, one of the most pressing political questions of the age has been whether Islam is hostile to religious freedom. Daniel Philpott examines conditions on the ground in forty-seven Muslim-majority countries today and offers an honest, clear-eyed answer to this urgent question.

It is not, however, a simple answer. From a satellite view, the Muslim world looks unfree. But, Philpott shows, the truth is much more complex. Some one-fourth of Muslim-majority countries are in fact religiously free. Of the other countries, about forty percent are governed not by Islamists but by a hostile secularism imported from the West, while the other sixty percent are Islamist.

The picture that emerges is both honest and hopeful. Yes, most Muslim-majority countries are lacking in religious freedom. But, Philpott argues, the Islamic tradition carries within it "seeds of freedom," and he offers guidance for how to cultivate those seeds in order to expand religious freedom in the Muslim world and the world at large.

Praise for Religious Freedom in Islam

"Here is an informed, honest and nuanced study on the freedom deficit in the contemporary world of Islam. Unlike the Islamophobes who have an agenda against the faith, and the apologists who do not acknowledge the troubles within it, Philpott examines the tensions between Islamic law and religious freedom while not neglecting secular aspects of the problem. His comparisons to the Catholic tradition are particularly insightful, as the case for freedom can be similar in different traditions."

Mustafa Akyol, Senior Fellow on Islam and Modernity at the Cato Institute