Book Talk: They Will Have to Die Now: Mosul and the Fall of the Caliphate

A seminar with James Verini, Contributing Writer at the New York Times Magazine and National Geographic, on his forthcoming book, They Will Have to Die Now: Mosul and the Fall of the Caliphate (W.W. Norton  & Company, 2019). 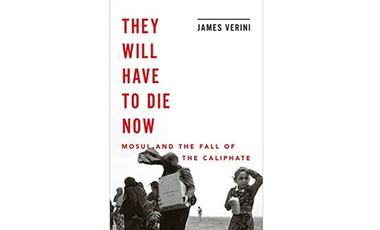 A seminar with James Verini, Contributing Writer at the New York Times Magazine and National Geographic, on his forthcoming book, They Will Have to Die Now: Mosul and the Fall of the Caliphate (W.W. Norton  & Company, 2019).

About They Will Have to Die Now

From the W.W. Norton & Company webpage:

"James Verini arrived in Iraq in the summer of 2016 to write about life in the Islamic State. He stayed to cover the jihadis’ last great stand, the Battle of Mosul, not knowing it would go on for nearly a year, nor that it would become, in the words of the Pentagon, "the most significant urban combat since WWII."

They Will Have to Die Now takes the reader into the heart of the conflict against the most lethal insurgency of our time. We see unspeakable violence, improbable humanity, and occasional humor. We meet an Iraqi major fighting his way through the city with a bad leg; a general who taunts snipers; an American sergeant who removes his glass eye to unnerve his troops; a pair of Moslawi brothers who welcomed the Islamic State, believing, as so many Moslawis did, that it might improve their shattered lives. Verini also relates the rich history of Iraq, and of Mosul, one of the most beguiling cities in the Middle East."