Book Talk: Values, Political Action, and Change in the Middle East and the Arab Spring

Followed by a book signing at the Harvard COOP at 1400 Massachusetts Avenue in Harvard Square. 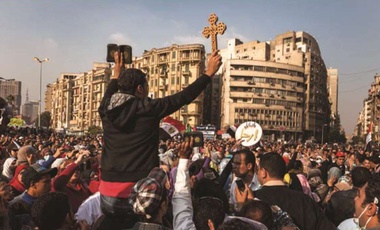 "Although many have tried, the spontaneity of the Arab Spring uprisings and the unpredictability of its diverse geographical outcomes have resisted explanation. For social scientists, part of the challenge has been how to effectively measure and analyze the empirical data, while another obstacle has been a lack of attention to the worldviews, value orientations, and long-term concerns from the people of the Middle East and North Africa.

In order to meet these challenges head-on, Mansoor Moaddel and Michele J. Gelfand have assembled an international team of experts to explore and employ a new and diverse set of frameworks in order to explain the dynamics of cross-national variation, values, political engagement, morality, and development in these regions. To this end, the authors address a wide range of questions, such as: To what extent do recent events reflect changes in values among the Middle Eastern publics? Are youth uniformly more supportive of change than the rest of the population? To what extent are changes in values connected to changes in identities? How do we explain the process of change in the long term?

As Moaddel and Gelfand remark in their book's introduction, 'Our hope is that this collective effort will not only contribute to the development of the social sciences in the Middle East and North Africa, but also to practical political actions and public policies that serve social tolerance and harmony, peace, and economic prosperity for the people of the region.'"

Michele J. Gelfand is Visiting Scholar at the Middle East Initiative for the 2016-17 academic year. She is Professor of Psychology and Affiliate of the RH Smith School of Business and Distinguished University Scholar Teacher at the University of Maryland, College Park, and is an expert on culture and conflict. Her work has been published in outlets such as Science, Proceedings of the National Academy of Sciences, Academy of Management Review, Journal of Applied Psychology, Annual Review of Psychology, Psychological Science, the Journal of Personality and Social Psychology, among others. She is the co-editor of The Handbook of Negotiation and Culture (with Jeanne Brett, Stanford University Press) and The Psychology of Conflict and Conflict Management in Organizations (with Carsten De Dreu, Erlbaum) and is the founding co-editor of the Advances in Culture and Psychology series and Frontiers of Culture and Psychology series (with CY Chiu and Ying-Yi Hong, Oxford University Press). Gelfand is the Past President of the International Association for Conflict Management, Past Division Chair of the Conflict Division of the Academy of Management, and Past Treasurer of the International Association for Cross-Cultural Psychology.

Mansoor Moaddel studies culture, ideology, political conflict, revolution, and social change. His current work focuses on the causes and consequences of human values. He has carried out values surveys in Egypt, Iran, Iraq, Jordan, Lebanon, Morocco, Pakistan, Saudi Arabia, Tunisia, and Turkey. His previous research project analyzed the determinants of ideological production in the Islamic world, in which he studies the rise of Islamic modernism in Egypt, India, and Iran in the late nineteenth and early twentieth centuries; liberal nationalism in Egypt, anti-clerical secularism in Iran, liberal Arabism and pan-Arab nationalism in Syria and Iraq in the first half of the twentieth century; and Islamic fundamentalism in Algeria, Egypt, Iran, Jordan, and Syria in the second half of the twentieth century.