Book Talk: Women and the Egyptian Revolution: Engagement and Activism during the 2011 Arab Uprisings

A seminar with Nermin Allam, Assistant Professor of Politics at Rutgers University - Newark, on her recent book, Women and the Egyptian Revolution: Engagement and Activism during the 2011 Arab Uprisings (Cambridge University Press, 2017). 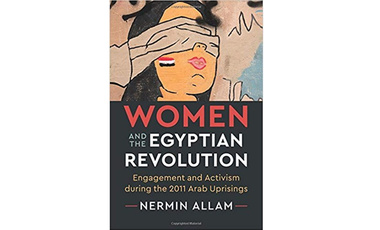 A seminar with Nermin Allam, Assistant Professor of Politics at Rutgers University - Newark, on her recent book, Women and the Egyptian Revolution: Engagement and Activism during the 2011 Arab Uprisings (Cambridge University Press, 2017).

About Women and the Egyptian Revolution

From the Cambridge University Press webpage:

"Since the fall of the former Egyptian president Hosni Mubarak, female activists have faced the problem of how to transform the spirit of the uprising into long-lasting reform of the political and social landscape. In Women and the Egyptian Revolution, Nermin Allam tells the story of the 2011 uprising from the perspective of the women who participated, based on extensive interviews with female protestors and activists. The book offers an oral history of women's engagement in this important historical juncture; it situates women's experience within the socio-economic flows, political trajectories, and historical contours of Egypt. Allam develops a critical vocabulary that captures women's activism and agency by looking both backwards to Egypt's gender history and forwards to the outcomes and future possibilities for women's rights. An important contribution to the under-researched topic of women's engagement in political struggles in the Middle East and North Africa, this book will have a wide-ranging impact on its field and beyond."