Cartooning the Police: A Graphic History of Contemporary Egypt 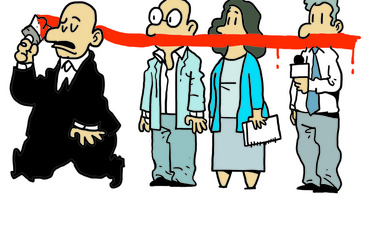 ​﻿﻿Jonathan Guyer is a journalist focused on the politics of art and literature in the Middle East. He is a fellow at the Radcliffe Institute for Advanced Study at Harvard University and a contributing editor of the Cairo Review of Global Affairs. He has written for the Atlantic, Guernica, Harper’s, Los Angeles Review of Books, Le Monde diplomatique, New Yorker, New York Review Daily, New York Times, Paris Review, and Rolling Stone, among others. His research has been supported by fellowships from Fulbright (2012–2013) and the Institute of Current World Affairs (2015–2017). He blogs at Oum Cartoon (http://oumcartoon.tumblr.com) and tweets: @mideastXmidwest.