In remarks delivered at an April 26 event at the Center for the National Interest, Graham Allison applied the lessons from his new book Destined for War: Can America and China Escape Thucydides's Trap? to the “gathering storm” over North Korea’s nuclear program to analyze how the United States and China might react, and possibly be drawn into conflict. 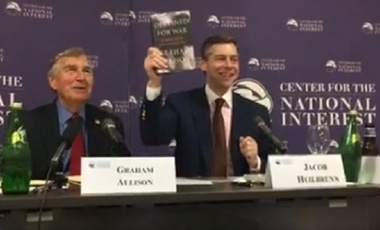 This event was broadcast on Facebook Live and can be viewed here. The following event summary was published by the Center for the National Interest.

What are the scenarios that may lead to war between the world’s ruling power, the United States, and China, a rising power and America’s nearest rival? Graham Allison, Director of the Belfer Center for Science and International Affairs at Harvard’s Kennedy School of Government, contemplates how might the next great power war begin in his latest article for The National Interest, “Destined for War?” In remarks delivered at an April 26 event at the Center for the National Interest, Dr. Allison applied the lessons from his most recent work to the “gathering storm” over North Korea’s nuclear program to analyze how the United States and China might react, and possibly be drawn into conflict.

Imagining that he were invited to sit in on the Senate-wide briefing on North Korea, Allison surmised that he would come away from the meeting with two key questions: First, could President Donald Trump order a strike on North Korea? And second, could such a strike be the “match that started the fire” at the end of which American and Chinese soldiers would be killing each other? To the first question, the answer is assuredly “yes,” given that the new administration has been at pains to emphasize America’s readiness to confront the regime of Kim Jong-un over nuclear weapons and missile testing. Statements such as “the era of strategic patience is over” and “If China decides to help, that would be great. If not, we will solve the problem without them!” have been steadily emanating from Washington since the beginning of President Trump’s term. Allison noted that Trump’s bottom line message is that North Korea will not acquire the ability to hit the United States with nuclear weapons. Washington’s options are flexible, ranging from a limited strike on the North’s nuclear weapons and missile launching infrastructure, to turning the entire country into “cinders and ash.” But if Trump is determined to enforce this policy, which many in Congress support, military action may be unavoidable.

The second question, whether such a confrontation would lead to war between the world’s two greatest powers, is far more difficult to answer, Allison concluded. Most analysts would postulate that war between China and the United States is unlikely, even extremely unlikely. This argument rests on a couple key premises: first, the leaders of both countries know such a war would be ruinous and would risk escalation to nuclear war, and second, the leaderships of both countries have endeavored to work constructively to avoid sliding down the path to war and falling into what Allison terms “Thucydides’s Trap.”

Yet, he said a scenario being unlikely does not preclude it from happening—history is littered with events judged to be highly improbable that nevertheless came to pass. Allison referenced World War I, the Cuban missile crisis, and the intervention of China in the Korean War to push the American offensive back to the 38th parallel. These crises were also thought to be exceedingly unlikely, yet each of them happened. Therefore, he argued, we should not discount the possibility of an unpremeditated war breaking out between the U.S. and China by way of a crisis on the Korean peninsula.

Allison stated that if Kim Jong-un continues along his current course, North Korea will soon acquire the capability to strike the west coast of the United States with an intercontinental ballistic missile (ICBM)—the question is, what will President Trump decide to do to address it? If his advisors tell him that all options short of military action have failed, then, will he decide to wait for North Korea to acquire that capability before striking, or will he opt for a preventive attack to destroy its nuclear infrastructure and weaponry before the North gains this capability? Launching a strike on North Korea carries great risks: for instance, the shelling of Seoul by the North, which lies only a handful of miles from the demilitarized zone, or even the deployment of the North’s nuclear weapons if the Kim regime were convinced it was going to be destroyed and  faced a “use it or lose it” scenario. If North Korea responded with an attack, Allison observed, there would be a Second Korean War, since the South would feel compelled to respond with force. In the event of such a war, the United States and China might both feel compelled to intervene to back up their allies and secure the North’s nuclear stockpile, lest it fall into the wrong hands. Then any minor clash between the two powers could provide the spark that could set off war between the world’s two rival great powers. “The Cuban missile crisis played out in thirteen days and they were terrifying,” Allison noted. “The next thirteen months or more may be terrifying” as well, he said.

To avoid such a nightmare scenario, Allison said the U.S. must be “more inventive” than it has been in the past when dealing with the North Korean nuclear weapons file. He stated that he agreed with President Trump—what the United States has done in prior confrontations with North Korea has been to choose the least bad option, but in this case that has essentially meant to “blink,” and concede to each of its new nuclear development benchmarks. Each side—China, North Korea, and the U.S.—has misguidedly held to “maximalist, unrealistic claims.” Solving the North Korean nuclear problem, and thereby foreclosing one path to a great power war, could possibly cost agreeing to allow the North to keep its current nuclear capabilities so long as it pledged to not develop missiles with the range to strike the U.S. homeland. Selling this deal to the Congress and to Asian allies of the U.S., who would remain within striking distance of North Korea’s existing missiles, could be politically difficult. Yet it would be an option preferable to the leveling of Seoul and a clash between China and America, and would give Kim Jong-un’s regime what it seeks above all: survival.