Challenges to the Syria Peace Talks in Geneva: How Local Governance and the War Economy Shape Prospects for International Diplomacy

A seminar with Omar Abdulaziz Hallaj, Coordinator of the Syria Project at the Common Space Initiative in Beirut. 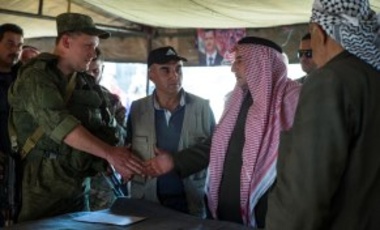 A seminar with Omar Abdulaziz Hallaj, Coordinator of the Syria Project at the Common Space Initiative in Beirut.

The political process brokered by the US and Russia has managed to create unprecedented hope to end Syria’s five year civil war. The Syrian conflicting parties have not yet fathomed the momentum of this deal. Though some progress on the ground is witnessed as part of the “cessation of hostilities”, the political process has not yet seen any major breakthroughs as the negotiating parties, supported by regional allies are resisting it every step of the way. However, the main challenges to the peace process require further understanding. Five years of war have created new geographic realities on the ground: governance structures, political economy and cultural paradigms. These geographies will not be easily by-passed. Dealing with the fragmented situation on the ground will hinder the prospects of a top-down solution, particularly as none of the negotiating parties has full control over their constituencies on the ground. The presentation will focus on mechanisms to assist the political process by highlighting different scenarios for a gradual re-aggregation of the country. Dealing with local actors and local peace assets must be re-assessed to create a forceful bottom up momentum to support fragile internationally brokered Geneva talks.

Omar Abdulaziz Hallaj is a consultant on urban planning, development and local governance. He is co-coordinator of the Syria Project at the Common Space Initiative in Beirut, where he is engaged in facilitating various dialogues and research projects for peace building and recovery planning in Syria. Formerly, he was the CEO of the Syria Trust for Development, and served on the boards of several NGO’s, and public commissions. His professional and research work relates institutional, financial and political frameworks to the production of built environment. In 2007, Mr. Hallaj was the recipient of the Aga Khan Award for Architecture as team leader of the Shibam Urban Development Project (GIZ). He subsequently served on the master jury and the steering committee of the Award.

He graduated from the University of Texas in 1989 and obtained a Masters of Architecture from the same university in 1992. Mr. Hallaj has researched, published and lectured on a variety of issues related to the history, economics and development policies in the Muslim world and Arab region.

Co-sponsored by the Ash Center for Democratic Governance and Innovation and MEDINA, the Arab Student Association at the Harvard Graduate School of Design.