Coming Home? The Dilemmas of Political Settlement(s) and Refugee Return in Syria 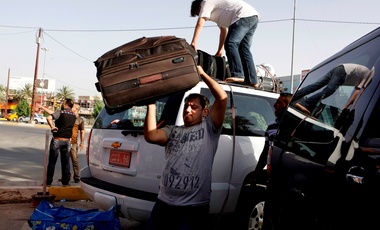 AP Photo/Hadi Mizban
Syrian refugees leave Iraq to Syria to reunite with their families at a bus station in Baghdad, Iraq, Tuesday, June 11, 2013.

The current frameworks for ending the Syrian conflict have proven inadequate thus far. Increasingly, international and regional actors are bypassing the multilateral processes established in Geneva and Astana to advance their own agendas, adversely affecting the potential return of displaced populations. Though the regime of President Bashar al-Assad seems to have the upper hand, claims that the Syrian conflict is almost over, that reconstruction is about to commence and that refugees will soon be able to go home are premature and unrealistic. This becomes even more apparent when the triggers for the return of refugees are taken into account.

Maha Yahya is director of the Carnegie Middle East Center, where her work focuses broadly on political violence and identity politics, pluralism, development and social justice after the Arab uprisings, the challenges of citizenship, and the political and socio-economic implications of the migration/refugee crisis.

Prior to joining Carnegie, Yahya led work on Participatory Development and Social Justice at the United Nations Economic and Social Commission for Western Asia (UN-ESCWA). She was previously regional adviser on social and urban policies at UN-ESCWA and spearheaded strategic and inter-sectoral initiatives and policies in the Office of the Executive Secretary which addressed the challenges of democratic transitions in the Arab world. Yahya has also worked with the United Nations Development Program in Lebanon, where she was the director and principal author of The National Human Development Report 2008–2009: Toward a Citizen’s State. She was also the founder and editor of the MIT Electronic Journal of Middle East Studies.

Yahya has worked with international organizations and in the private sector as a consultant on projects related to socioeconomic policy analysis, development policies, cultural heritage, poverty reduction, housing and community development, and postconflict reconstruction in various countries including Lebanon, Pakistan, Oman, Egypt, Jordan, Saudi Arabia, and Iran. She has served on a number of advisory boards including the MIT Enterprise Forum of the Pan Arab Region and the Lebanese Center for Policy Studies.

Yahya  is the author of numerous publications, including most recently Great Expectations in Tunisia (March 2016); Refugees and the Making of an Arab Regional Disorder (November 2015); Towards Integrated Social Development Policies: A Conceptual Analysis (UN-ESCWA, 2004), co-editor of Secular Publicities: Visual practices and the Transformation of National Publics in the Middle East and South Asia (University of Michigan Press, 2010) and co-author of Promises of Spring: Citizenship and Civic Engagement in Democratic Transitions (UN-ESCWA, 2013).