A Conversation with Ambassador Robert Ford on Iraq and Syria

A seminar with Ambassador Robert Ford, former US Ambassador to Syria and Algeria. Moderated by Nicholas Burns, Professor of the Practice of Diplomacy and International Politics at Harvard Kennedy School. 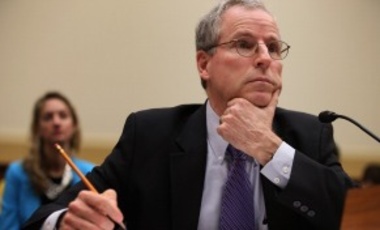 Getty Images
U.S. Ambassador to Syria Robert Ford testifies about the ongoing war in Syria before the House Foreign Affairs Committee in the Rayburn House Office Building on Capitol Hill.

Moderated by Nicholas Burns, Professor of the Practice of Diplomacy and International Politics at Harvard Kennedy School.

Ambassador Ford spent 4½ years working for the U.S. Mission in Iraq and later 3 years working on Syria. He will talk about the roots of the unrest in both countries that spawned the Syrian civil war and the rise of the Islamic State straddling across the two countries' borders.  He will also assess international efforts to date to contain what has become one conflict and suggest signposts that will tell us if our next steps and our strategy will work or not.

Ambassador Robert S. Ford served thirty years in the State Department and Peace Corps, finishing his career as the U.S. Ambassador to Syria from 2011 to 2014. For his leadership of the American Embassy in Damascus he received a Presidential Honor award, and for his work on Syria he received the Secretary of State’s Distinguished Service Award, the U.S. Department of State’s highest award. For his stout defense of human rights in Syria, in 2012 he received from the John F. Kennedy Library in Boston the annual Profile in Courage award.

Ford also served as the U.S. Ambassador to Algeria (2006-2008) where he boosted bilateral cooperation in fields such as education and the rule of law.

He served three times in Iraq between 2003 and 2010, including as the Ambassador’s senior political advisor during the tumultuous elections and stand-up of the new, permanent Iraqi government 2004-2006. Later, as Deputy Ambassador in Iraq 2008-2010 he assembled a government team that devised the logistical and security plans the new Obama administration used to establish our diplomatic posts in Iraq now.

As Deputy Ambassador in Bahrain 2001-2003 Ford led the Embassy team that helped negotiate the free trade agreement with Bahrain, the first U.S. free trade deal with a Persian Gulf state. Ford also served in Cameroon, in Algeria 1994-1997 during the civil war there, in Egypt and Turkey and in domestic assignments at the U.S. Department of State in Washington. He started his career as a Peace Corps volunteer in Morocco.  He speaks fluent Arabic and French. Ford has a B.A. from Johns Hopkins University in Baltimore and an M.A. from the Johns Hopkins School of Advanced International Studies in Washington.

Ford is now a resident scholar at the Middle East Institute in Washington and teaches at Johns Hopkins University. He has appeared on CNN, PBS, Fox News, NPR, the BBC and Arab networks. His wife, Alison Barkley, is also a Foreign Service Officer, and they make their home in Baltimore where they are avid fans of local theater, classical music and the Baltimore Orioles.