A Conversation with the Prime Minister of Kosovo, Albin Kurti

Please join the Prime Minister of the Republic of Kosovo, Albin Kurti, in an online conversation at Harvard University about his first 100 days in office and the current political crisis in Kosovo. This event will be moderated by Nicholas Burns, Goodman Family Professor of the Practice of Diplomacy and International Relations and Faculty Chair of the Future of Diplomacy Project at the Harvard Kennedy School. It is co-sponsored by the Harvard College Albanian Students Association, the Future of Diplomacy Project, and the Harvard Political Union.

PLEASE NOTE: This webinar will be conducted via Zoom. Please register in advance for this meeting here. After registering, you will receive a confirmation email containing information about joining the meeting. This is open to Harvard affiliates or by invitation only. 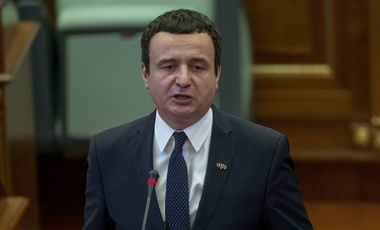 Albin Kurti is the fourth Prime Minister of the Republic of Kosova, as well as the president of the biggest political party in the country, Lëvizja Vetëvendosje. Kurti joined the presidency of the Students Independent Union of the University of Prishtina (SIUUP) in August 1997, which organized peaceful, non-violent protests for the release of the university buildings and premises which were occupied by the authorities of the Serbian regime. When the war began in Kosova, in August 1998, Kurti began working as the Secretary of the Office of the General Political Representative of the Kosova Liberation Army (KLA), Adem Demaçi. When the NATO bombing of Serbia and Kosova commenced in March 1999, Kurti remained in Prishtina and was arrested by the Serbian police on April 27, 1999, and then imprisoned. When Serbian forces withdrew from Kosova on June 10, Kurti and many other Albanian political prisoners were transferred to Serbian prisons. Due to international pressure, Kurti was released on December 7, 2001.

On April 23, 2003, Kurti graduated with a degree in Computer Science from the University of Prishtina. In June 2005, Kurti with other political activists co-founded “Lëvizja VETËVENDOSJE” (Movement for SELF-DETERMINATION!). He was the President of “Lëvizja VETËVENDOSJE!” until March 2015, and was re-elected as President of the Movement for Self-DETERMINATION! based on one member, one vote method in January 2018. Between 2005-2017, he spent almost one and a half years under arrest in Kosova, charged by the authorities of UNMIK, EULEX, and the Republic of Kosova. Kurti has served three terms in office as a member of the Assembly of the Republic of Kosova representing “Lëvizja VETËVENDOSJE!”. In 2017, Kurti was the MP who won the highest number of votes in the country. He was the Movement’s candidate for Prime Minister of Kosova. In the early parliamentary elections held on October 6th, 2019, Albin Kurti and the Movement for SELF-DETERMINATION! won the highest number of votes. Albin Kurti has published over 550 articles and has been invited to present at different renowned universities inside and outside the country. He has also served as the Chair of the Committee on Foreign Affairs at the Assembly. He is fluent in Albanian, English, and Serbian.