A Conversation with Tawakkol Karman 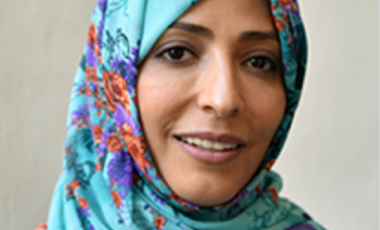 Tawakkol Karman was awarded the 2011 Nobel Peace Prize in recognition of her nonviolent struggle for the safety of women and their right to full participation peacebuilding process in Yemen. Karman was the first Yemeni, the first Arab woman, and the second Muslim woman to receive this honor, and at 32, was the youngest Nobel Prize Laureates to date. Karman is a mother of three as well as a human rights activist, journalist, politician, and the president of the organization Women Journalists Without Chains.. She is a General Coordinator of the Revolutionary Youth Council in Yemen and a member of the advisory board for Transparency International as well as several other international human rights NGOs. Bold and outspoken, Karman has been imprisoned on a number of occasions for her pro-democracy, pro-human rights protests. Amongst Yemen’s Youth movement, she is known as “mother of the revolution,” “the iron woman,” and the Lady of the Arab Spring. She received an undergraduate degree in Commerce from the University of Science and Technology in Sana’a and completed a graduate degree in Political Science at the University of Sana’a.